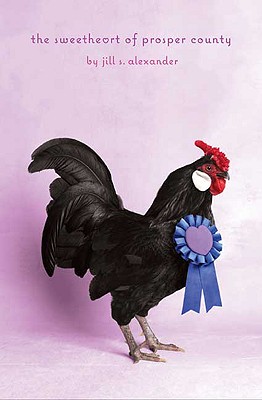 The Sweetheart of Prosper County (Hardcover)

Almost-15-year-old Austin Gray is tired of standing at the curb and watching the parade pass her by. Literally. She decides this is the year she’ll ride on the hood of a shiny pickup truck in the annual parade, waving to the crowd and finally showing the town bully that she’s got what it takes to be the Sweetheart of Prosper County.

But far from simply being a beauty contest, becoming Sweetheart involves participation in the Future Farmers of America (FFA), raising an animal, and hunting or fishing. Austin will do almost anything to become Sweetheart, and has the support of her oldest friend, Maribel, her new FFA friends (including the reigning Sweetheart, and a quiet, cute cowboy), an evangelical Elvis impersonator, a mysterious Cajun outcast, and a rooster named Charles Dickens. If only her momma would stop overprotecting her, and start letting Austin live her own life. But Austin can’t move on until Momma moves on, too—and lets the grief of losing Austin’s daddy several years before out into the open.

Here is a bighearted story that will leave readers agreeing with Austin that sometimes, it’s not what you ride, it’s how you roll.

JILL S. ALEXANDER grew up in rural East Texas, where she went to work at age twelve bussing tables at the local truck stop. There, she met folks from all walks of life whose eccentricities color her work today. Jill has survived a tornado and catching on fire. She hates whining but loves fancy shoes, muscle cars, and Johnny Cash--preferably, all three at once. Jill taught high school English and Spanish before deciding to take a chance on writing full-time. A native of Texas, she lives in Tyler, Texas, with her husband and son. This is her first novel.

Praise For The Sweetheart of Prosper County…

“First-time novelist Alexander offers a delightful, funny story about teenagers living in a West Texas farming community…Austin’s year of added responsibility and independence make for a substantive, enjoyable coming-of-age novel that will speak to rural and urban readers alike.”—Booklist

“Alexander’s debut is marked by a colorful supporting cast, fresh dialogue and Southern personality, which contribute to an entertainingly theatrical vision of smalltown life. The strong but precarious mother-daughter bond is well paired to the themes of finding inner strength and self-acceptance and letting go of the past.”—Publishers Weekly