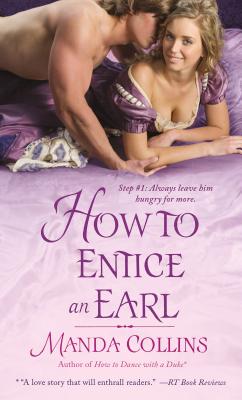 How to Entice an Earl (Ugly Ducklings Trilogy #3)

How to Entice an Earl

Lady Madeline Essex is the last of the unwed "ducklings" in her family—and by far the most outspoken. But when she boldly enters London's most notorious gaming house in search of fodder for her novel, even her sharp tongue can't save her from the horrible crime she stumbles upon there. As luck would have it, first on the scene is the last man she wants to see her vulnerable. The one man who could tempt her heart…

Christian Monteith, the new Earl of Gresham, isn't much for card rooms and gaming hells. But as a favor to his former commanding officer, he's investigating a gamester for espionage on the night that Maddie ventures in looking more enticing than he's ever seen her. Suddenly, his feelings for his friend aren't so friendly anymore. And when her curiosity brings the impetuous novelist to the attention of a madman, Christian will stop at nothing to protect her—from a sinister plot that is far more dangerous than any stolen kiss…


Praise For How to Entice an Earl (Ugly Ducklings Trilogy #3)…

“A fast-paced, adventurous love story that will enthrall readers. Her dynamic characters, a murder, and passion combine with the perfect amount of lively repartee.” —RT Book Reviews on HOW TO DANCE WITH A DUKE

“If Manda Collins keeps writing novels like [this], she is sure to become a bestseller.” —Romance Junkies, Blue Ribbon Review on HOW TO DANCE WITH A DUKE

“A vivid reminder of why I love historical romances….an excellent debut by Manda Collins that has me desperate for the next book in this trilogy.” —Night Owl Romance, Top Pick on HOW TO DANCE WITH A DUKE

“Manda Collins is a sparkling new voice in romantic fiction. Her smart, witty storytelling will keep readers turning pages.” —Toni Blake on HOW TO DANCE WITH A DUKE

“A splendid read, well written and fun.” —The Romance Reader on HOW TO DANCE WITH A DUKE

“Written with intelligence, wit and compassion, How to Dance With a Duke is a book that should put Manda Collins on the radar of historical romance readers everywhere.” —The Romance Dish

“A refreshing and fun debut spiced with just the right amount of mystery.” —Rakehell on HOW TO DANCE WITH A DUKE

“Warmth, wit, and delicious chemistry shine through every page…With a heroine to root for and a hero to die for, How to Dance with a Duke is a romance to remember.” —Bestselling author Julie Anne Long

“Sexy, thrilling, and romantic--whether she's writing of the mysteries of the heart or of the shady underworld of Egyptian relic smuggling, Manda Collins makes her Regency world a place any reader would want to dwell.” —USA Today bestselling author Kieran Kramer on HOW TO DANCE WITH A DUKE

“Manda Collins writes sexy and smart historical romance, with a big dash of fun. Romance readers will adore How to Dance with a Duke!” —Vanessa Kelly, named one of Booklist's "New Stars of Historical Romance"

“Regency lovers have a new author to add to their dance cards! Manda Collins heats up the ballroom and writes romance to melt even the frostiest duke's heart. With sparkling Regency wit, a dash of mystery, and just the right amount of steam, How to Dance with a Duke is an enchanting debut, sure to sweep readers off their feet!” —Tessa Dare, named one of Booklist's "New Stars of Historical Romance"

Manda Collins grew up on a combination of Nancy Drew books and Jane Austen novels, and her own brand of Regency romantic suspense is the result. An academic librarian by day, she investigates the mysteries of undergraduate research at her alma mater, and holds advanced degrees in English Lit and Librarianship. Her debut novel, How to Dance with a Duke spent five weeks on the Nielsen Bookscan Romance Top 100 list, was nominated for an RT Reviewer's Choice Award for best debut historical romance, and finaled in the Gayle Wilson Award of Excellence contest. Both How to Entice an Earl and Why Dukes Say I Do were selected for inclusion in Eloisa James's Reading Romance column. Her latest book, Why Earls Fall in Love, a February 2014 release, was called "sparkling romance" by Publishers Weekly and is set in Bath, England, one of her favorite cities in the world.
Loading...
or
Not Currently Available for Direct Purchase