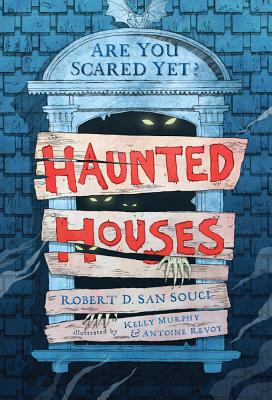 Haunted Houses (Are You Scared Yet?)

Scare-master Robert San Souci serves up ten chilling tales about untraditional haunted houses: a mansion full of pirate treasure, a ghost trapped in a mysterious dollhouse, a boy whose vacation house comes complete with people-eating spiders, and many more. But beware because not all of the protagonists in these stories get out alive.

Praise For Haunted Houses (Are You Scared Yet?)…

“Outright skinpricklers . . . Offer this to those who already know San Souci's work or who want follow-ups for Alvin Schwartz's Scary Stories to Tell in the Dark series, should it somehow stay on the shelf long enough to want company.” —Booklist

“These original tales are not for the fainthearted: Many of the stories' protagonists end their tales dead--or worse. By turns poignant and downright scary, this is a solid addition for stouthearted middle-grade readers.” —Kirkus Reviews

Robert San Souci is the award-winning author of many picture books based on folk tales from around the world, including The Talking Eggs, Kate Shelley, Haunted Houses, and the bestselling Short & Shivery series. A native Californian, he lived in San Francisco.

Kelly Murphy has illustrated many books for children including Masterpiece, Alex and the Amazing Time Machine, and the Nathaniel Fludd, Beastologist books. She lives in Providence, Rhode Island.

Writer/Illustrator Antoine Revoy has a long-held passion for all forms of comics—graphic novels, manga and bandes dessinées—fostered by his childhood living in Paris, France and Tokyo, Japan. Antoine's clients include Der Spiegel and New York Times, and his work has received acclaim by the Society of Illustrators, American Illustration, and Spectrum. Antoine currently teaches at the Rhode Island School of Design. He lives in Providence, RI, with his wife, illustrator Kelly Murphy.
Loading...
or support indie stores by buying on