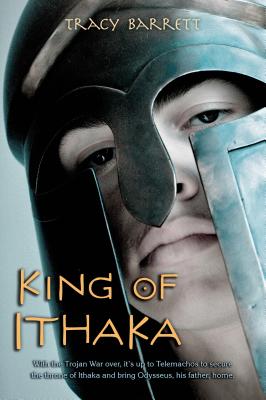 Telemachos has a comfortable life on his small island of Ithaka, where his mother, Penelopeia, keeps the peace even though the land has been without its king, his father Odysseus, since the Trojan War began many years ago.

But now the people are demanding a new king, unless Telemachos can find Odysseus and bring him home. With only a mysterious prophecy to guide him, Telemachos sets off over sea and desert in search of the father he has never known. Tracy Barrett brings Greek mythology to life in King of Ithaka.


Praise For King of Ithaka…

“* This is a strong retelling with definite YA appeal, particularly in Telemachos's final triumph, where he takes the chariot reins of his life in his own hands.” —School Library Journal, starred review

“Readers without prior knowledge of the Homeric epics can fully enjoy this as a rousing adventure, but those who are already acquainted with Odysseus' tale will appreciate Barrett's audacious take on the arrogant hero and his milquetoast son.” —BCCB

“Telemachos' first-person narration allows readers to experience the complexity of his character as the prince matures and evolves into a leader that would make any parent proud.” —Booklist

“Readers are sure to enjoy a fast-paced story and action-packed journey in this tale of Telemachos, only son of Odysseus. . . . What a great complement for readers of The Odyssey!” —Library Media Connection

“With its focus on Telemachos's determination and growth, Barrett's tale should be an enjoyable and accessible primer for readers who've not yet read the original.” —Publishers Weekly

“A rousing introduction to epic characters and mythic creatures of ancient Greece from the fresh perspective of an engaging young hero.” —Kirkus Reviews

Tracy Barrett is the award-winning author of several books for young readers, including the Sherlock Files books, King of Ithaka, Cold in Summer and Anne of Byzantium. Her books have been named an ALA Best Book for young adults, a Bank Street best children’s book of the year, and a New York Public Library Book for the Teen Age, among many other honors. She is a professor of Italian language and civilization at Vanderbilt University and lives with her family in Nashville, Tennessee.