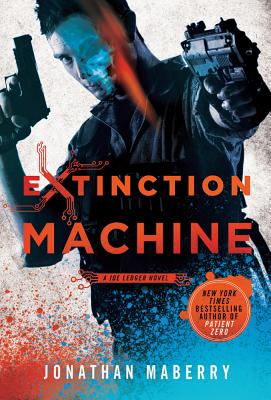 In Extinction Machine, the fifth Joe Ledger book by Jonathan Maberry, the DMS must go up against someone—or something—in search of new technology that could bring about world war

The President of the United States vanishes from the White House.

A top-secret prototype stealth fighter is destroyed during a test flight. Witnesses on the ground say that it was shot down by a craft that immediately vanished at impossible speeds.

All over the world reports of UFOs are increasing at an alarming rate.

And in a remote fossil dig in China dinosaur hunters have found something that is definitely not of this earth. There are rumors of alien-human hybrids living among us.

Joe Ledger and the Department of Military Sciences rush headlong into the heat of the world's strangest and deadliest arms race, because the global race to recover and retro-engineer alien technologies has just hit a snag. Someone—or something--wants that technology back.

“The Ledger novels are exciting sf thrillers that just happen to involve stuff that's a little out there (and Joe himself is a realistically portrayed soldier who, from time to time, has a hard time dealing with the weirdnesses that surround him). Readers familiar with the series will need no prodding to check this new one out, and newcomers, immediately upon finishing the book, will want to hunt down the earlier installments.” —Booklist, starred review

JONATHAN MABERRY is a New York Times bestselling, Inkpot winner, five-time Bram Stoker Award-winning author of Relentless, Ink, Patient Zero, Rot & Ruin, Dead of Night, the Pine Deep Trilogy, The Wolfman, Zombie CSU, and They Bite, among others. His V-Wars series has been adapted by Netflix, and his work for Marvel Comics includes The Punisher, Wolverine, DoomWar, Marvel Zombie Return and Black Panther. He is the editor of Weird Tales Magazine and also edits anthologies such as Aliens vs Predator, Nights of the Living Dead (with George A. Romero), Don’t Turn out the Lights, and others. Find him at www.jonathanmaberry.com and on all social media platforms.
Loading...
or support indie stores by buying on