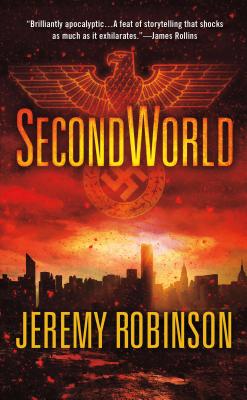 Lincoln Miller, an ex–Navy SEAL turned NCIS Special Agent, is sent to Aquarius, the world's only sub-oceanic research facility, located off the Florida Keys, to investigate reports of ocean dumping. A week into his stay, strange red flakes descend from the surface. Scores of fish are dead and dying, poisoned by the debris that turns to powder in Miller's fingers and tastes like blood.

Miller heads for the surface, ready to fight whoever is polluting on his watch. But he finds nothing—no ships, polluters, oxygen. Cut off from the rest of the living world, Miller makes his way to Miami where he discovers a lone survivor and the awful truth: the strange phenomenon that robbed the air of its life-giving force was an attack by an enemy reborn from the ashes of World War II. And they're just getting started. Miami, Tel Aviv, and Tokyo have all been destroyed. And if Miller can't put a stop to those responsible in seven days, the rest of the world will be next…


Praise For SecondWorld: A Thriller…

“Jeremy Robinson's latest thriller is massive in scope and brilliantly apocalyptic. Here is a feat of storytelling that shocks as much as it exhilarates. SecondWorld is far from second best.” —James Rollins

“The popcorn novel of the summer has arrived, and Jeremy Robinson delivers an action fest that rivals the best of James Rollins, Clive Cussler, and Matthew Reilly.” —Associated Press

“Another crisply plotted tale from the fertile imagination of Jeremy Robinson. This one has it all, frozen Nazis, UFO crashes, Antarctica, and some really cool science. Plan to hunker down for an all nighter with this one. I did.” —Steve Berry, New York Times bestselling author

“Gripping, propelled by expertly-controlled pacing and lively characters. Robinson's punchy prose style will appeal to fans of Matthew Reilly's fast-paced, bigger-than-life thrillers, but this is in no way a knockoff. It's a fresh and satisfying thriller that should bring its author plenty of new fans.” —Booklist

“A brisk thriller with neatly timed action sequences, snappy dialogue and the ultimate sympathetic figure in a badly burned little girlwith a fighting spirit...The Nazis are determined to have the last gruesome laugh in this efficient doomsday thriller.” —Kirkus Reviews

“The year 2012 is synonymous with Doomsday, but what if the cause of the chaos to come was. . .Adolf Hitler? Read SecondWorld, a new treat from Jeremy Robinson.” —Steve Alten, New York Times bestselling author

“A harrowing, edge of your seat thriller told by a master storyteller, Jeremy Robinson's Secondworld is an amazing, globetrotting tale that will truly leave breathless.” —Richard Doestch, international bestselling author

Jeremy Robinson is the author of bestselling thrillers, including Antarktos Rising, The Last Hunter: Descent, The Didymus Contingency and the Jack Sigler Thrillers—Pulse, Instinct and Threshold. His novels have been translated into eight languages. Born in the coastal town of Beverly, Massachusetts, Robinson grew up on a steady diet of science fiction, and started out his creative career as a comic book and comic strip illustrator. He is the chairman and founder of New Hampshire AuthorFest, a non-profit organization promoting and supporting literacy in New Hampshire, where he lives with his wife and three children.
Loading...
or
Not Currently Available for Direct Purchase