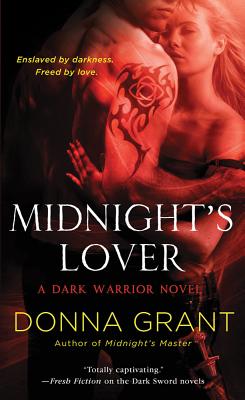 Defenders against evil. Bound by the gods. The Dark Warriors are taking their battle from ancient Scotland to the modern world—where a woman's love can set them free…

Driven by the fierce god within him, highlander Ian Kerr is sworn to fight for the land he loves—and the brother he lost. But when he's transported four centuries into the future, he finds himself fighting his own desires—for a beautiful, bewitching woman who could hold a warrior spellbound…

Danielle Buchanan has heard the legends. She has felt the power of Druid blood in her veins. But she has never known a man as fearsome—or as haunted—as the warrior Ian. With her magic, Dani must help him fight an ancient evil. With her heart, she must join him in his quest. But only with her soul can she free him from his curse…and seal their fates together.

“Paranormal elements and scorching romance are cleverly intertwined in this tale of a damaged hero and resilient heroine.” —Publishers Weekly on Midnight's Lover

“It's good vs. evil Druid in the next installment of Grant's Dark Warrior series. The stakes get higher as discerning one's true loyalties becomes harder. Grant's compelling characters and the continued presence of previous protagonists are key reasons why these books as so gripping. Another exciting and thrilling chapter!” —RT Book Reviews on Midnight's Lover (4 1/2 stars!)