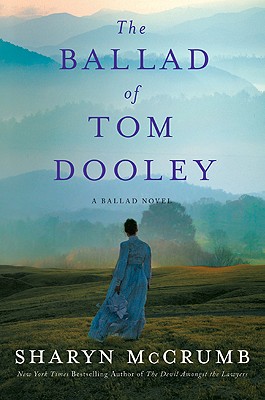 The Ballad of Tom Dooley


Hang down your head, Tom Dooley…The folk song, made famous by the Kingston Trio, recounts a tragedy in the North Carolina mountains after the Civil War. Laura Foster, a simple country girl, was murdered and her lover Tom Dula was hanged for the crime. The sensational elements in the case attracted national attention: a man and his beautiful, married lover accused of murdering the other-woman; the former governor of North Carolina spearheading the defense; and a noble gesture from the prisoner on the eve of his execution, saving the woman he really loved.

With the help of historians, lawyers, and researchers, Sharyn McCrumb visited the actual sites, studied the legal evidence, and uncovered a missing piece of the story that will shock those who think they already know what happened—and may also bring belated justice to an innocent man. What seemed at first to be a sordid tale of adultery and betrayal was transformed by the new discoveries into an Appalachian Wuthering Heights. Tom Dula and Ann Melton had a profound romance spoiled by the machinations of their servant, Pauline Foster.

Bringing to life the star-crossed lovers of this mountain tragedy, Sharyn McCrumb gifts understanding and compassion to her compelling tales of Appalachia, and solidifies her status as one of today's great Southern writers.

Praise For The Ballad of Tom Dooley: A Ballad Novel…

"McCrumb's tale is impeccably researched ... McCrumb's novel casts light on the often bleak context surrounding characters who have become legend."--Publishers Weekly  "In a story with parallels to Wuthering Heights, McCrumb makes a strong case for a sociopathic servant as the catalyst for the deadly events that ensued.True to the language and culture of its time and place."--Library Journal

SHARYN MCCRUMB's books have been named Notable Books of the Year by the "New York Times," she has been named as a "Virginia Women of History" and won the Appalachian Writer of the Year Award.
Loading...
or
Not Currently Available for Direct Purchase