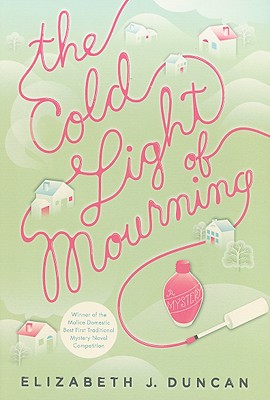 The Cold Light of Mourning (Hardcover)

Elizabeth J. Duncan spins a charming tale of murder and intrigue in this winning first novel.

The picturesque North Wales market town of Llanelen is shocked when Meg Wynne Thompson, a self-made beauty who has turned out to be something of an unpopular bride, goes missing on her wedding day…and turns up dead. The last person believed to have seen her is manicurist Penny Brannigan, an expatriate Canadian who has lived in North Wales for almost twenty-five years. When Penny notices that something is not quite right at the funeral of her dearest friend, she becomes emotionally invested in the case, and sets out to investigate.

It seems that several people, including the bride’s drunken, abusive father, had reasons to wish Meg dead, but when the trail leads to her groom’s home, an explosive secret will shake the small town.

With its bucolic Welsh setting and vivid, colorful characters, this mystery is sure to delight the most discerning of traditional-mystery fans.

Elizabeth J. Duncan has worked as a writer and editor for some of Canada's largest newspapers, including the "Ottawa Citizen" and "Hamilton"" Spectator." She lives with her dog, Dolly, in Toronto where she teaches in the public relations program at Humber College. She enjoys spending time each year in North Wales and is the first Canadian writer to win the Malice Domestic Best First Traditional Mystery Novel Competition. "The Cold Light of Mourning," her first novel, is also the winner of the William F. Deeck-Malice Domestic Grant.

Praise For The Cold Light of Mourning: A Mystery…

“Duncan’s debut is a gentle delight sure to please fans of the classic English mystery.”—Kirkus Reviews

“The Cold Light of Mourning is a must read for 2009 with hope that another is soon to follow.”—The Hamilton Spectator

“Duncan has a fine eye for detail, plays fair with the clues and creates engaging characters.”—Globe and Mail