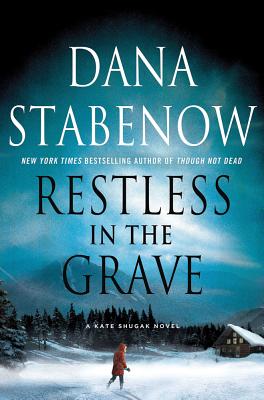 Restless in the Grave (Hardcover)

New York Times bestseller Dana Stabenow returns with her most outstanding novel yet, teaming up two of her most beloved characters, Aleut private investigator Kate Shugak and Alaska state trooper Liam Campbell, in the same story for the first time.

Alaska aviation entrepreneur Finn Grant died in the fiery crash of his Piper Super Cub. Someone sabotaged his engine, and virtually everyone in southwestern Alaska has a motive, including his betrayed wife, his bullied children, and Liam’s wife, bush pilot Wyanet Chouinard. With few places to turn, Liam asks his former mentor Niniltna post commander Sergeant Jim Chopin, for help, and Jim quickly brings Kate onto the case.

Working undercover as—of all things—a waitress at Bill’s Bar and Grill, Kate learns over beer and burgers that Grant’s business had expanded meteorically over the last two years. After buying the closed Air Force base south of town from the federal government at a bargain-basement price, he became a fixed-base operator running his fishing, hunting, and flight-seeing business, servicing planes flying through the area, and most interestingly and lucratively, getting into the air freight business. But what kind of freight was he moving, and where?

The answers involve Kate in her most challenging case to date, one that starts with murder and quickly sprawls into a much larger conspiracy ranging from the darkest family secrets to treason and beyond. Restless in the Grave is a treat for fans and another outstanding addition to Dana Stabenow’s acclaimed and award-winning series.

Dana Stabenow, "New York Times" bestseller and Edgar Award winner, is the author of eighteen previous Kate Shugak novels, four Liam Campbell mysteries, three science-fiction novels, and two thrillers. She was born, raised, and lives in Alaska, where she was awarded the Governor's Award for the Humanities.

Praise For Restless in the Grave…

“Entertaining 19th novel featuring the brash, fearless PI [Kate Shugak]… The book sparkles with energy and wit, and packs an unexpected punch.”
--Publishers Weekly on Restless in the Grave


“Though Not Dead is the latest in Dana Stabenow’s robust series. It’s her most far-reaching Shugak story yet, ambitiously incorporating some of Alaska’s colorful history”
—Seattle Times on Though Not Dead

“In Edgar winner Stabenow’s brilliant eighteenth novel to feature the feisty Alaska detective … Kate is at her butt-kicking best as she and Mutt, her inseparable half-wolf, half-husky companion, deal with murder, theft, and deception.”
—Publishers Weekly (starred review) on Though Not Dead

“Stabenow is blessed with a rich prose style and a fine eye for detail. … It’s an outstanding series.... If you’ve never visited Alaska, it’s also an intriguing introduction to that big, brawling, rather bewildering state.”
—The Washington Post on A Night Too Dark

“Grade: A. Some of the greatest mystery writers enrich us with their wonderful sense of place. Stabenow is one of them: Alaska’s answer to Tony Hillerman, she brings us the sights and sounds that few visitors will ever know.… If you haven’t discovered Stabenow yet, start here—then go back to A Cold Day for Murder and enjoy the whole story.”
—Rocky Mountain News on Whisper to the Blood