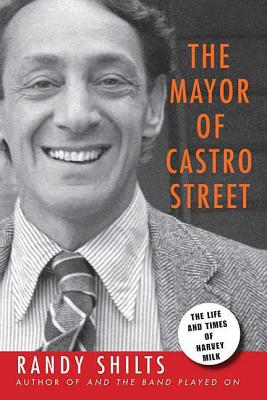 The Mayor of Castro Street

The Life and Times of Harvey Milk

The Mayor of Castro Street is Shilts's acclaimed story of Harvey Milk, the man whose personal life, public career, and tragic assassination mirrored the dramatic and unprecedented emergence of the gay community in America during the 1970s.

Known as "The Mayor of Castro Street" even before he was elected to the San Francisco Board of Supervisors, Harvey Milk's personal and political life is a story full of personal tragedies and political intrigues, assassinations at City Hall, massive riots in the streets, the miscarriage of justice, and the consolidation of gay power and gay hope.

The Mayor of Castro Street is a story of personal tragedies and political intrigues, assassination in City Hall and massive riots in the streets, the miscarriage of justice and the consolidation of gay power and gay hope.

Harvey Milk has been the subject of numerous books and movies, including the Academy Award–winning 1984 documentary, The Times of Harvey Milk. His life is also the basis of a 2008 major motion picture, Milk, starring Sean Penn.


Praise For The Mayor of Castro Street: The Life and Times of Harvey Milk…

“A no-holds-barred character study and a history of the local gay movement . . . An investigative piece on the mechanics of big-city government in all its expedient, back-biting splendor.” —The Washington Post

Randy Shilts was born in 1951, in Davenport, Iowa. One of the first openly gay journalists hired at a major newspaper, he worked for the San Francisco Chronicle for thirteen years. He died of AIDS in 1994 at his home in the Sonoma County redwoods in California. He was the author of The Mayor of Castro Street: The Life and Times of Harvey Milk (1982), And the Band Played On: Politics, People and the AIDS Epidemic (1987), and Conduct Unbecoming: Lesbians and Gays in the U.S. Military (1993). He also wrote extensively for many major newspapers and magazines, including The New York Times, Newsweek, Esquire, The Los Angeles Times, and The Advocate. And the Band Played On was made into a docudrama that was broadcast on HBO in 1993.
Loading...
or support indie stores by buying on