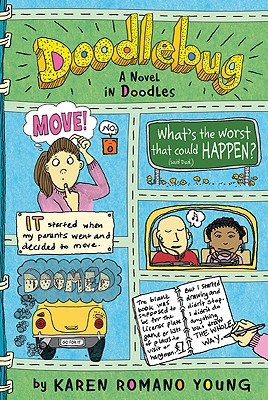 On the drive to their new home, her mother gives Dodo a blank notebook, which she uses to chronicle the move, the first days in a new city, and the ups and downs of starting a new school and making new friends. In the process, she reinvents herself as the Doodlebug. Her little sister seems to adjust to everything so easily why is it so hard for Dodo?

“We can only hope that this amusing and touching title will soon have a sequel so that we can once again share in Dodo Doodlebug’s world.” –Through The Looking Glass Children’s Book Reviews


“Like Melissa Moss’ Amelia books, Young presents the story as if it is Doodlebug’s notebook, incorporating drawings, graphs, and different kinds of lettering that are an integral part of the story and make this insightful look into a middle-grader’s life a pleasure to read.” –Booklist


“It is sure to inspire creativity in children and teach them they can overcome obstacles that they may encounter.” –The Kansas City Star


“Young provides an engaging story about how Dodo reinvents herself as the Doodlebug in her new school, tracking her year in an illustration-filled notebook.” –Scripps News

KAREN ROMANO YOUNG (www.karenromanoyoung.com) is the author of over a dozen books for children, both fiction and nonfiction, including "The Beetle and Me: A Love Story, "which has won several state awards, received starred reviews from "Kirkus Reviews "and "Publishers Weekly, " and earned her a "Flying Start" in "Publishers Weekly." She lives in Bethel, Connecticut, with her family.
Loading...
or
Not Currently Available for Direct Purchase