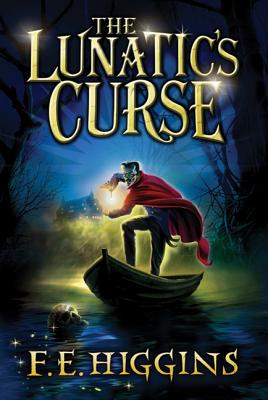 The town of Opum Oppidulum is home to the freezing Lake Beluarum and its rumored monster. On an island at the center of the lake is an asylum; no one has ever escaped it. So how will Rex, whose father, Ambrose Grammaticus, has been imprisoned there under false pretenses, prove that Ambrose is not insane? And if Rex can free his father, will his evil stepmother drive them both to madness?

Higgins' fans will devour this deliciously scary tale, a "polyquel" to her previous books, all of which can be read singly or together. But not in the dark . . .


Praise For The Lunatic's Curse…

“The Lunatic's Curse has a large cast of twisted characters and a winding plot that will keep readers delightfully immersed in macabre adventure.” —School Library Journal

“This series is shaping up into an enticing, shadowy den where scary-story addicts can get their fix.” —BCCB

“Readers may find this a tempting, if slightly more serious, treat to follow Lemony Snicket.” —Booklist

“Readers with strong stomachs and a taste for melodramatic narratives bedizened with words like ‘tenebrous' and ‘mephitic' will devour this yarn with relish. So to speak.” —Kirkus Reviews

“Ultimately, this story is about not letting oneself sink to the level of one's enemies, but readers will be most taken by the delightfully dense atmospherics fairly dripping off the pages. Readers need not be familiar with Higgins' other books, but the hints dropped in to tie the world together will likely send them hunting for more while awaiting the next. A hyperquel, perhaps?” —Booklist on The Eyeball Collector

“Readers with a taste for lurid prose, macabre twists, riddles, exotic poisons, high-society caricatures, murderous schemes and scenes of stomach-churning degeneracy will find some or all of these in every chapter, and though the author trots in multiple characters and references from previous episodes, this one stands sturdily on its own.” —Kirkus Reviews on The Eyeball Collector

“It is a dark and diabolical story, set in an alternative universe that is distinctly Dickensian and peopled with Higgins's creepiest cast yet. …Higgins's clever and intricate plot moves along swiftly. Her dark atmosphere is well drawn, with stunning graphic images that are not for the faint of heart. Riddles are laced throughout the novel, with answers appended. …This 'polyquel' will appeal to mature readers who enjoy highly imagined dark stories.” —School Library Journal on The Eyeball Collector

“Higgins has a marvelous flair for the macabre, and her deft pacing escalates to a satisfying crescendo of shivers.... Readers who appreciate the grotesqueries of Cirque du Freaks--but packaged with fine writing and a well-conceived plot--will want to add this to their collection.” —BCCB on The Eyeball Collector

“Higgins is a mastermind at creating a creepy world where children still maintain some sense of hope.” —VOYA on The Bone Magician

“The cast of unusual characters and their interrelated stories carry readers along swiftly to an ending that begs for a sequel. Budding fans of Poe or Dickens will be entranced by this atmospheric novel.” —School Library Journal on The Bone Magician

“This 'paraquel'--meaning it takes place in the same world, but follows a different thread--to Higgins' excellent Black Book of Secrets (2007) drips with the same lightly fantastical, heavily Dickensian atmosphere...there is still no end of picaresque charms, creepy turns, and beguiling cast members...” —Booklist on The Bone Magician

“In this standalone companion novel to The Black Book of Secrets, British author Higgins deftly balances the exceedingly harsh circumstances with wry humor, sly commentary on class issues, and a protagonist who has enough wisdom to recognize the fact that his optimism is perhaps misguided but who manages to retain it anyway.” —The Bulletin of The Center for Children's Books on The Bone Magician

“Set in Urbs Umida, where 'merely to be born was considered the first step towards dying', The Bone Magician . . . is a deliciously dark Gothic thriller-cum-Holmesian-whodunit, the writing so atmospheric that the fumes from the noxious River Foedus, where the murder victims end up, seem to seep off the page and swirl round the reader.” —The Telegraph, UK on The Bone Magician

“Young readers with a taste for the macabre will find it deliciously scary.” —The Guardian, UK on The Bone Magician

“Loosely linked by references and cameos to The Black Book of Secrets (2007), this 'paraquel' spins its wheels through the muck-encrusted streets of Urbs Umida, dropping both corpses and more Dickensian-style characters into the mix. Hired by an undertaker for eerie nighttime vigils, young Pin is amazed to see a cadaver supposedly reanimated by magician Benedict Pantagus and his herbalist assistant, Juno. When heavily contrived circumstances throw Pin and Juno together, Pin becomes as determined to discover her secrets as he is to clear the name of his vanished father, who is accused of murder.” —Kirkus on The Bone Magician

“The Black Book of Secrets has it all: danger, adventure, theft, murder, body snatching, poisonings, a touch of humor, and enough mystery to keep you guessing until the very end. . . . An enjoyable story that begs for a sequel.” —PW Children's Bookshelf, "Galley Talk"

F.E. Higgins is the author of The Black Book of Secrets, The Bone Magician and The Eyeball Collector. As a child, she once saw a ghostly apparition, and ever since then, she has been fascinated by the macabre. She travels the world, collecting strange artifacts and stranger stories. Born in London, F.E. Higgins now lives in a haunted house that dates back to the fifteenth century, in a small village in rural Kent.
Loading...
or support indie stores by buying on