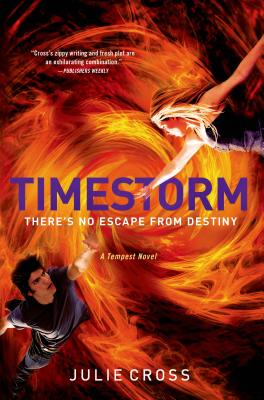 A Tempest Novel (The Tempest Trilogy #3)

The battle between the Tempest Division and Eyewall comes to a shocking conclusion in Timestorm—the final installment of Julie Cross's Tempest trilogy, where the need for survival stretches the boundaries of history, both past and future, and the world Jackson Meyer once knew is a place forever marked by the detrimental effects of time travel.

As Jackson recovers from his brush with death, he's surrounded not only by the people he loves most—his dad, Courtney, and Holly—he's also among a few of the original time travelers. As he learns more about their lives and how this world began, it becomes apparent that they need to put a stop to Thomas and Dr. Ludwig's experimenting at Eyewall Headquarters. What starts out as an escape plan becomes a war between time and humanity, between free will and peace. It's the battle Jackson was born to fight and he's not about to back down. Not for anything. Not for anyone.


Praise For Timestorm: A Tempest Novel (The Tempest Trilogy #3)…

“Timestorm is a fast-paced, inventive conclusion to The Tempest Trilogy. Author Julie Cross negotiates the twists and turns of time travel with deft skill.” —Fresh Fiction.com

“The characters are realistically portrayed, the relationships dynamic, and the writing strong. Fans of time travel/different and inventive concepts of time travel simply must give Cross' trilogy a shot, because I genuinely believe this is as original as time travel gets.” —Finding Bliss in Books

“I was left with a lot of feelings and after I took a few moments to cope, the feeling that overpowered the others was satisfaction. What a ride it has been.” —Night Owl Teen

“The best part of the novel lies in the emotional connections among the characters.” —Kirkus Reviews

“Timestorm finishes out the series in a satisfying fashion.” —Romantic Times

“It will be difficult waiting another year for the next installment. . .fans will wait anxiously and hope that Cross continues to treat us to the roller coaster ride that is life with the time traveling, teenage CIA agent – Jackson Meyer.” —Examiner.com on Vortex

“Fans of Cross's debut novel, Tempest, will love returning to the time-jumping adventures of Jackson Meyer. . . . Expect a thrill a minute as Jackson discovers he's even more special than he initially thought.” —RT Book Reviews on Vortex

JULIE CROSS lives in central Illinois with her husband and three children. She never wrote fiction before May of 2009, but since then, hasn't gone a day without writing. She is the author of The Tempest Trilogy.
Loading...
or
Not Currently Available for Direct Purchase