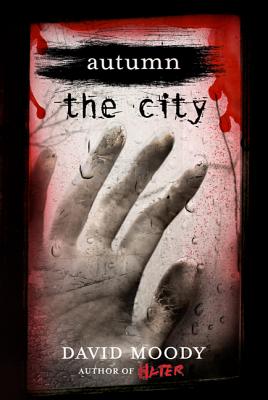 The City: The City (Autumn series #2)

A bastard hybrid of War of the Worlds and Night of the Living Dead, the Autumn series chronicles the struggle of a small group of survivors forced to contend with a world torn apart by a deadly disease. After 99% of the population of the planet is killed in less than 24 hours, for the very few who have managed to stay alive, things are about to get much worse. Animated by "phase two" of some unknown contagion, the dead begin to rise. At first slow, blind, dumb and lumbering, quickly the bodies regain their most basic senses and abilities... sight, hearing, locomotion... As well as the instinct toward aggression and violence. Held back only by the restraints of their rapidly decomposing flesh, the dead seem to have only one single goal - to lumber forth and destroy the sole remaining attraction in the silent, lifeless world: those who have survived the plague, who now find themselves outnumbered 1,000,000 to 1...

While the first Autumn novel focused on those who escaped the city, Autumn: The City focuses on those who didn't.

Without ever using the 'Z' word, the Autumn series offers a new perspective on the traditional zombie story. There's no flesh eating, no fast-moving corpses, no gore for gore's sake. Combining the atmosphere and tone of George Romero's classic living dead films with the attitude and awareness of 28 Days (and Weeks) later, this horrifying and suspenseful novel is filled with relentless cold, dark fear.

Praise For Autumn: The City: The City (Autumn series #2)…

“With AUTUMN, David Moody paints a picture of a marvelously bleak dystopian future where the world belongs to the hungry dead. It's the creepy start to a compelling series.” —Jonathan Maberry, multiple Bram Stoker Award-winning author of Patient Zero and Zombie CSU

“Zombie fans rejoice! One of the original zombie novels is back from the grave to remind us all why the walking dead are so scary, and what it means to have a front-row seat for the end of the world. Autumn is genuinely creepy, an atmospheric study of what happens when the dead come back--and what we have to do just to survive.” —David Wellington, Author of Monster Island, Monster Nation, 99 Coffins