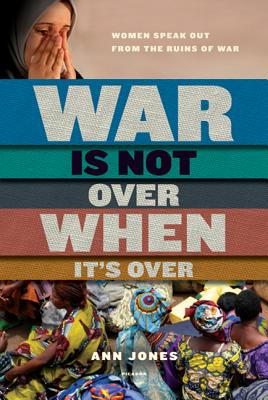 War Is Not Over When It's Over

Women Speak Out from the Ruins of War

From the renowned authority on domestic violence, a startlingly original inquiry into the aftermath of wars and their impact on the least visible victims: women

In 2007, the International Rescue Committee (IRC), which brings relief to countries in the wake of war, wanted to understand what really happened to women in post-conflict zones. Answers came through the point and click of digital cameras. On behalf of the IRC, Ann Jones spent a year traveling through Africa, East Asia, and the Middle East, lending cameras to women who had no other means of telling the world what war had done to their lives. Their photographs chronicle the consequences of modern warfare for the most vulnerable. Animated by the voices of brave and resourceful women, War Is Not Over When It's Over is a powerful dispatch from the ruins.


Praise For War Is Not Over When It's Over: Women Speak Out from the Ruins of War…

“Harrowing and important... What Jones brings to the fore here is sadly often overlooked in discussions of the world politic.” —Minneapolis Star Tribune

“Gripping... This searing exposé on war's remnants convincingly makes the case that gender inequality may be one of the greatest threats to peace.” —Kirkus Reviews

“While decrying the continuing ‘post-conflict zone' of violence against women…[Jones reveals] their fortitude in the direst of circumstances...[and] provides glimpses of hard-won triumphs.” —Publishers Weekly

Ann Jones, writer and photographer, is the author of seven previous books, including War Is Not Over When It's Over, Kabul in Winter, Women Who Kill, and Next Time She'll Be Dead. Since 9/11, Jones has worked with women in conflict and post-conflict zones, principally Afghanistan, and reported on their concerns. An authority on violence against women, she has served as a gender adviser to the United Nations. Her work has appeared in numerous publications, including The New York Times and The Nation.