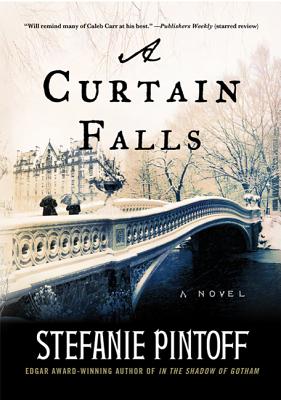 The careers of New York City detective Simon Ziele and his former partner, Captain Declan Mulvaney, went in remarkably different directions after the tragic death of Ziele's fiancée in the 1904 General Slocum ferry disaster. While earmarked for bigger things, Ziele moved north of the city to escape the violence, and Mulvaney dug in deeper, heading up the precinct in the most crime-ridden part of New York.

Yet with all of the resources at Mulvaney's disposal, a puzzling crime compels him to ask his former partner for help. A chorus girl has been found dead on a Broadway stage dressed as the lead. There is no sign of violence. The coroner would call it a suicide, but then she'd be the second actress to die that way in only days.

Following on the heels of Pintoff's Edgar Award–winning debut, A Curtain Falls is a moody and evocative tale that follows Ziele as he scours the streets in search of a true fiend.

Stefanie Pintoff is the author of A Curtain Falls, In the Shadow of Gotham, and Secret of the White Rose. In the Shadow of Gotham is the winner of the 2010 Edgar Award for Best First Novel and the Washington Irving Book Prize, and she has earned nominations for the Agatha, Anthony and Macavity Awards. She is also a graduate of Columbia University Law School and has a Ph.D. in literature from New York University. Now a full-time writer, she lives with her husband and daughter on Manhattan’s Upper West Side.

Praise For A Curtain Falls: A Novel (Detective Simon Ziele #2)…

“Stefanie Pintoff shows how the best in historical fiction not only unveils our past, but shows how our modern concerns evolved. . . . Her detailed characters and gripping plot about greed, jealousy, and obsession for fame set A Curtain Falls on a higher plane.” —Oline Cogdill, Sun-Sentinel

“This worthy sequel to Pintoff's acclaimed Edgar Award–winning debut, In the Shadow of Gotham, brings to life New York's theater world at the turn of the twentieth century and the fledgling science of criminology. Fans of Caleb Carr will like this one.” —Library Journal (starred review) on A Curtain Falls