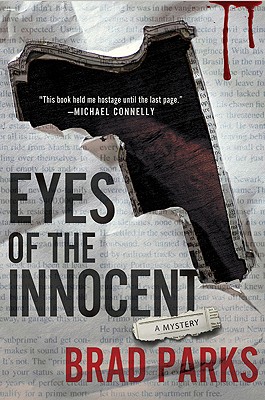 Eyes of the Innocent

Carter Ross, the sometimes-dashing investigative reporter for the Newark Eagle-Examiner, is back, and reporting on the latest tragedy to befall Newark, New Jersey, a fast-moving house fire that kills two boys.

With the help of the paper’s newest intern, a bubbly blonde known as “Sweet Thang,” Carter finds the victims’ mother, Akilah Harris, who spins a tale of woe about a mortgage rate reset that forced her to work two jobs and leave her young boys without child care. Carter turns in a front-page feature, but soon discovers Akilah isn’t what she seems. And neither is the fire.

When Newark councilman Windy Byers is reported missing, it launches Carter into the sordid world of urban house-flipping and Jersey-style political corruption. With his usual mix of humor, compassion, and street smarts, Carter is soon calling on some of his friends—gay Cuban sidekick Tommy Hernandez, T-shirt-selling buddy Tee Jamison, and on-and-off girlfriend Tina Thompson—for help in tracking down the shadowy figure behind it all.

Brad Parks’s debut, Faces of the Gone, won the Shamus Award and Nero Award for Best American Mystery. It was heralded as an engaging mix of Harlan Coben and Janet Evanovich. Now Parks solidifies his place as one of the brightest new talents in crime fiction with this authentic, entertaining thriller.


Praise For Eyes of the Innocent: A Mystery…

"A breezy, entertaining sequel to Parks' well-received debut."--Kirkus Reviews "Zany characters, witty dialog, and a plot that races to a bang-up finish are guaranteed to have readers cheering for the good guys. Parks’s sequel to his acclaimed debut, Faces of the Gone, is as good if not better. Think Lisa Scottoline meets Richard Yancey."--Library Journal (starred review) "Readers will meet colorful characters from the newsroom and the shady side of Newark in this fast-paced, suspenseful story. Parks' writing is clever and witty in this entertaining read."--RT Book Reviews (four stars) "Eyes of the Innocent is the complete package. With wonderful prose, witty observations and a relentless drive, this book held me hostage until the last page. Well done, Brad Parks!"--Michael Connelly

Brad Parks's first novel, "Faces of the Gone," won the Shamus Award and the Nero Award for Best American Mystery--he is the first author to win both honors for one book. A former reporter for "The Washington Post" and "The "[Newark, N.J.]" Star-Ledger," he is now a full-time author living in Virginia, where he is at work on the next Carter Ross adventure.
Loading...
or
Not Currently Available for Direct Purchase