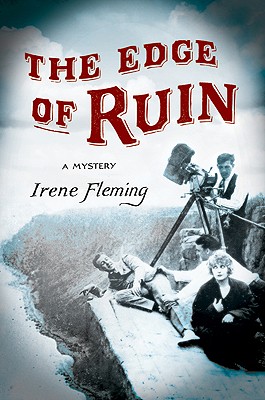 The Edge of Ruin

During the very early days of silent movies, a murder during filming threatens the lives of two independent film producers in this thrilling historical mystery One day in 1909, Emily Weiss's handsome and successful new husband, Adam, returns to their well-appointed Philadelphia home to tell her he's sold everything they own, and they are going to New York to become independent movie producers. As he's already signed a contract that will ruin them if not fulfilled, Emily agrees to go with him to New York and help him set up their movie company. But of course, it's not that easy--all movie production is controlled by Thomas Edison and his partners in the Patent Trust who hold many of the major patents used in filmmaking. And they employ a team of often brutal detectives whose main job it is to go around and disrupt independent films, breaking cameras and even heads if necessary. With a colorful crew of actors, Adam and Emily head to Fort Lee, New Jersey where they set shooting the films to fulfill their contract. After evading Edison's detectives a couple of times, one of them arrives on the set in time for a major crowd scene. And, while almost everyone's back is turned, he is murdered. Now Adam sits in jail, charged with the crime, while Emily has to not only finish films but uncover the truth about the shocking murder.

IRENE FLEMING lives in Lambertville, New Jersey, with her musician husband and their cat. Writing as Kate Gallison, she has three private eye novels and five traditional mysteries to her credit. She is a member of Sisters in Crime, Mystery Writers of America, the Authors Guild, the Hunterdon County Board of Elections and the Episcopal Church. She is an avid fan of silent movies.
Loading...
or
Not Currently Available for Direct Purchase