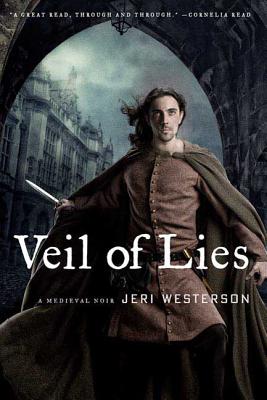 "A great read, through and through. Westerson's finely wrought portrait of gritty Medieval London is embued with great wit and poignancy. Crispin Guest is a knight to remember." -- Cornelia Read, author of A Field of Darkness, on Veil of Lies.

Crispin Guest is a disgraced knight, stripped of his rank and his honor - but left with his life - for plotting against Richard II. Having lost his bethrothed, his friends, his patrons and his position in society. With no trade to support him and no family willing to acknowledge him, Crispin has turned to the one thing he still has - his wits - to scrape a living together on the mean streets of London. In 1383, Guest is called to the compound of a merchant - a reclusive mercer who suspects that his wife is being unfaithful and wants Guest to look into the matter. Not wishing to sully himself in such disgraceful, dishonorable business but in dire need of money, Guest agrees and discovers that the wife is indeed up to something, presumably nothing good. But when he comes to inform his client, he is found dead - murdered in a sealed room, locked from the inside. Now Guest has come to the unwanted attention of the Lord Sheriff of London and most recent client was murdered while he was working for him. And everything seems to turn on a religious relic - a veil reported to have wiped the brow of Christ - that is now missing.


Praise For Veil of Lies: A Medieval Noir (The Crispin Guest Novels #1)…

“Brimming with historical detail and descriptions of life in 1383 London, Westerson's mystery debut is a brilliant tale of survival in a hostile environment, where anything can lead to death. Fans of medieval mysteries will put this on their reserve list. Highly recommended.” —Library Journal (starred review)

“This first installment in a planned series, introducing a conflicted hero and delving into the grim lives of ordinary people in medieval times, will appeal to mystery and history fans alike.” —Kirkus Reviews

“An entertaining read that makes the prospect of sequels welcome.” —Publishers Weekly

“This authentically detailed medieval mystery has an intriguingly dark edge that will appeal to fans of both historical fiction and noir.” —Booklist

JERI WESTERSON is the author of books featuring Crispin Guest, including Veil of Lies, Serpent in the Thorns, The Demon's Parchment, Troubled Bones, and Blood Lance.  She lives in Menifee, California.
Loading...
or
Not Currently Available for Direct Purchase