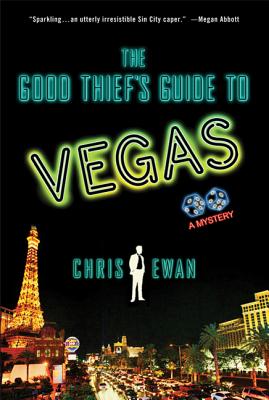 The Good Thief's Guide to Vegas

Chris Ewan's The Good Thief's Guide to Vegas is the next caper in a series that's being called "impressive… comic…fresh" (Publishers Weekly--starred review).

Charlie Howard isn't only a part-time crime writer and part-time thief; he's also a magician. For his next trick, he'll relieve Josh Masters, the famous illusionist vying for the affections of Charlie's agent Victoria, of a fortune in casino chips stashed in his hotel safe. Revenge would be sweet—if there weren't a dead redhead floating in Masters' bathtub and Masters himself hadn't just disappeared in a puff of smoke after cheating at roulette. Convinced that Charlie is in on the scam, the casino's owners give him an impossible mission: pull off an elaborate heist to reimburse the house for every dollar his "accomplice" made off with, or enjoy a one-way trip into the desert.


Praise For The Good Thief's Guide to Vegas: A Mystery…

“The Good Thief's Guide to Vegas, the latest gem in Chris Ewan's sparkling series, carries us along on an utterly irresistible sin-city caper. ” —MEGAN ABBOTT, EDGAR®-WINNING AUTHOR OF QUEENPIN AND BURY ME DEEP

“The Good Thief's Guide to Paris features wonderful descriptions of locale, engaging and wacky characters, and an engrossing plot that will leave readers eager for the next book.” —Library Journal (Starred review)

“Charlie is agreeable company…as he narrates his own skilled thievery and flights of quick thought. Seeing the pieces fly together at the end without a single missing bit is pretty fun.” —HOUSTON CHRONICLE ON THE GOOD THIEF'S GUIDE TO AMSTERDAM