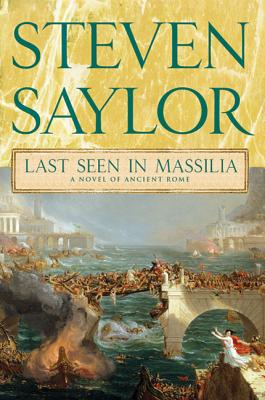 In the city of Massilia (modern-day Marseille), on the coast of Southern Gaul, Gordianus the Finder's beloved son Meto has disappeared--branded as a traitor to Caesar and apparently dead. Consumed with grief, Gordianus arrives in the city in the midst of a raging civil war, hoping to discover what happened to his son. But when he witnesses the fall of a young woman from a precipice called Sacrifice Rock, he becomes entangled in discovering the truth--did she fall or was she pushed? And where, in all of this, could it be connected to his missing son? Drawn into the city's treacherous depths, where nothing and no one are what they seem, Gordianus must summon all of his skills to discover his son's fate--and to safeguard his own life.

“Saylor presents a vivid tableau of an ancient city under siege and an empire riven by internecine strife...One of today's finest historical mystery series.” —Publishers Weekly on Last Seen in Massilia

“Saylor's scholarship is breathtaking and his writing enthralls.” —Ruth Rendell, The Sunday Times (London) on Last Seen in Massilia

“Saylor puts such great detail and tumultuous life into his scenes that the sensation of rubbing elbows with the ancients is quite uncanny.” —The New York Times Book Review on A Murder on the Appian Way