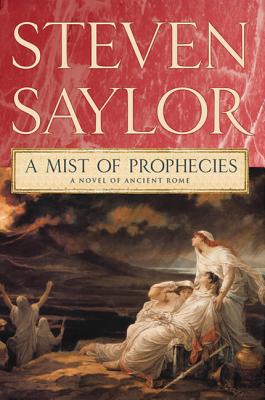 A Mist of Prophecies

In the year 48 B.C., Rome is in the midst of Civil War. As Pompey and Caesar fight for control of the Republic, Rome becomes a hotbed of intrigue, driven by espionage, greed and betrayals.

A beautiful young seeress staggers across the Roman marketplace and dies in the arms of Gordianus the Finder. Possibly mad and claiming no memory of her past, Cassandra— like her Trojan namesake—was reputed to have the gift of prophecy, a gift many in Rome would pay for handsomely...or resort to murder.

Obsessed with Cassandra's mystery, Gordianus investigates her murder. As he peels away the veils of secrecy surrounding her life and death, he discovers a web of conspiracy linking many of Rome's most ruthless and powerful women. Now Gordianus's pursuit not only endangers his own life, but could change the future of Rome.

“As usual, Saylor's research is impeccable, but the history never distracts from the very human drama.... With this intelligent and compelling story, Saylor shows once again why fans of ancient historicals regard him as the leader of the field.” —Publishers Weekly (Starred Review)

“The problem with a writer with the brilliance of Steven Saylor is that he leaves almost impossible standards for other writers to measure up to. With A Mist of Prophecies, Saylor exceeds even his usual standards of excellence.” —El Paso Times

“If you want to visit Rome—ancient Rome—this is the way to go!” —Oklahoman

“It would be impossible to imagine a more stellar lineup of suspects in all imperial Rome.” —Kirkus Reviews

“Saylor writes with such easy grace that the politics of these vicious times become as captivating to the reader as the mystery of Cassandra's life and violent death.” —Tampa Tribune & Times

“A gritty depiction of the underbelly of the great city in its heyday...The secret history of Rome has never been so fascinating.” —Maxim Jakubowski, The Guardian