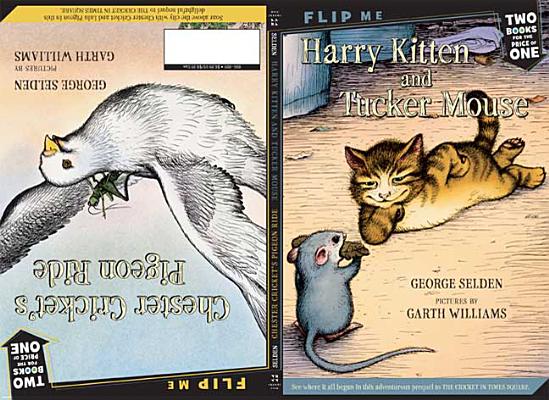 Two Books in One (Chester Cricket and His Friends)

Harry Kitten and Tucker Mouse
Meet Harry Kitten and Tucker Mouse. No one would ever dream that a cat and mouse could become friends, but that doesn't stop Harry and Tucker. All they have is each other to depend on. Together they begin an exciting adventure throughout New York, searching for a home they can call their own. But the two friends run into troublesome times in their journey around town. Is all hope lost? Where will they turn to next?

Chester Cricket's Pigeon Ride
Chester Cricket is homesick. When his friend Mario takes him to a sky show at the Planetarium, Chester realizes how much he misses seeing real stars at night. Happily, he finds his way out of the subway and into Times Square, where he might be able to see the sky—if he could just get past all of the bright lights. Then he meets Lulu Pigeon. Every pigeon Chester's ever known loves to eat crickets. But could Lulu turn out to be a friend? Could she fly him above the bright lights so he can see the starry night sky again?

Garth Williams (1912-96) illustrated all seven of the Chester Cricket books and many other works, including Stuart Little and Charlotte's Web.

“From the wryly humorous opening, in which the infant Tucker Mouse chooses his name, to the satisfying warmth of Tucker and Harry's defense of their drainpipe home in Times Square, the characters . . . are as vibrant and joyful as ever. . . . Wonderfully expressive black-and-white illustrations.” —Publishers Weekly on Harry Kitten and Tucker Mouse

“Chester, a country cricket who misses stargazing during his stay in the city, takes a breathtaking ride with new friend Lulu Pigeon over New York. Descriptions of Central Park and Times Square are evocative . . . Full-page pen-and-ink drawings are panoramic and most vibrant when depicting the familiar Chester, Harry Cat, and Tucker.” —Booklist on Chester Cricket's Pigeon Ride

“Thoughtful but unpretentious, humorous without more cleverness, this is nothing less than a good story, well told and sympathetically illustrated.” —School Library Journal on Chester Cricket's Pigeon Ride