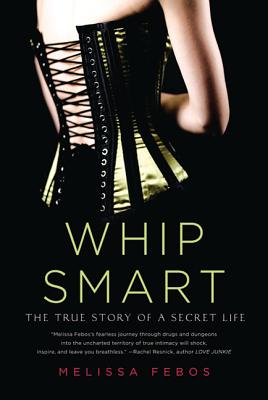 The True Story of a Secret Life

While a college student at The New School, Melissa Febos spent four years working as a dominatrix in a midtown dungeon. In poetic, nuanced prose she charts in Whip Smart how unchecked risk-taking eventually gave way to a course of self-destruction. But as she recounts crossing over the very boundaries that she set for her own safety, she never plays the victim. In fact, the glory of this memoir is Melissa's ability to illuminate the strange and powerful truths that she learned as she found her way out of a hell of her own making. Rest assured; the reader will emerge from the journey more or less unscathed.


Praise For Whip Smart: The True Story of a Secret Life…

“In her provocative debut…Febos pulls no punches as she describes in minute, and at times horrific, detail her working life…In lesser hands this could be a maudlin, salacious tale, but Febos's electrifying prose and unremitting honesty continually challenge the reader. Expertly captures grace within depravity.” —Kirkus Reviews

“Febos can really write, and it is the narrative voice she inhabits, at once honest and dispassionate, curious and even idealistic, that turns a timeworn story into a smart, provocative thrill-ride of a book…For all its jaw-dropping shock value...Whip Smart is, in the end, a treatise on the psychology of sex and power, subversion and submission—humanity.” —David Goodwillie for The Daily Beast

“Memoirs about salacious adventures have two requirements: they must be generous with the goods and astute with the analysis. Febos delivers on both, and with relish. No salty detail escapes her eye or goes unexamined. Febos is too self-aware to not see her past clearly, and too talented a writer to not make it fascinating.” —The Economist

“Febos' journeying into the darkest corners of both her and others' minds is entertaining and enlightening; there are weird, eye-popping, sad, hilarious, and all-too-human episodes and encounters on almost every page. Febos writes of her own walk on the wild side like a seasoned, and chastened, pro.” —Elle Magazine

“[Melissa Febos] ably dissects her own and others' psychological urges and sexual politics and presents it all in a way that renders the title apt. The memoir should be right at home next to Mary Karr, Nick Flynn and Alex Lemon on the bookshelf.” —New York Press

“All memoirs are an attempt to follow a trail of breadcrumbs home, yet WHIP SMART steps off the path, into the wooded shadows, and names that part of ourselves that could linger there forever. Melissa Febos masterfully brings us into these unexpected, unsettling places,  the least of which are the dungeons she so vividly—briefly—occupies.  WHIP SMART is a wild, bright-eyed, ride home.” —Nick Flynn, New York Times bestselling author of ANOTHER BULLSHIT NIGHT IN SUCK CITY

“WHIP SMART is remarkably honest, brave and provocative about growing up: the pleasures and perils of being visible, the temptations of being numb, and the weird kick of being desired.” —Rachel Resnick, author LOVE JUNKIE

“Mesmerizing. A brave, darkly wild and powerful memoir, Melissa Febos's fearless journey through drugs and dungeons into the uncharted territory of true intimacy will shock, inspire, and leave you breathless. Don't even think about resisting.” —Rachel Resnick, author LOVE JUNKIE

Melissa Febos is the author of the memoir Whip Smart, the essay collection, Abandon Me, and a craft book, Body Work. A 2022 Guggenheim Fellow, she is also the inaugural winner of the Jeanne Córdova Nonfiction Award from LAMBDA Literary and the recipient of fellowships from The National Endowment for the Arts, MacDowell, Bread Loaf, Lower Manhattan Cultural Council, The BAU Institute, Vermont Studio Center, The Barbara Deming Memorial Fund, and others. Her essays have appeared in The Paris Review, The Believer, McSweeney's Quarterly, Granta, Sewanee Review, Tin House, The Sun, and The New York Times. She is an associate professor at the University of Iowa, where she teaches in the Nonfiction Writing Program.