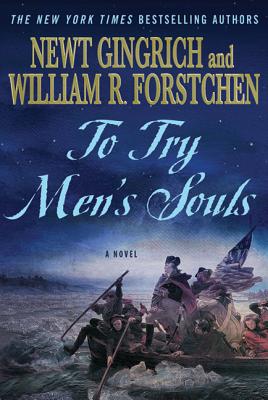 Bestselling authors Newt Gingrich and William R. Forstchen turn their sharp eye for detail on three men in the middle of the Revolutionary War and the birth of America.

It is the night before the crossing of the Delaware, one of the most iconic events in American history, and General Washington is full of doubt. The harsh winter and repeated defeats have dimmed his army's spirit. The revolution has come down to one desperate salvo as the freezing, hungry rebels slip across the river.

While Washington prepares, Thomas Paine, writing in Philadelphia, captures the army's grim reality in one line: "These are the times that try men's souls."

Private Jonathan Van Dorn is about to bring the war to his own doorstep. Jonathan must decide between staying loyal to the American cause and sparing his brother, who has joined the British.

Through these three men, Gingrich and Forstchen illuminate the Revolution's darkest days. They bring to life the thrilling Battle of Trenton, the victory that brought Americans the faith that they could win over insurmountable odds. With detailed research and incredible military insight, To Try Men's Souls is a novel that provides a rare and personal perspective of the men who fought for the United States of America.

Newt Gingrich, former Speaker of the House, is the author of several bestselling books, including Valley Forge, To Try Men's Souls, Pearl Harbor and Gettysburg (all with William R. Forstchen). He is a member of the Defense Policy Board and co-chair of the UN Task Force, is the longest-serving teacher of the Joint War Fighting course for Major Generals, and served in Congress for twenty years. He is also the founder of the Center for Health Transformation.

William R. Forstchen is the author of the New York Times bestseller One Second After and We Look Like Men of War, among numerous other books in diverse subjects ranging from history to science fiction. He has co-authored several books with Newt Gingrich, including Gettysburg: A Novel of the Civil War, Pearl Harbor, Days of Infamy, To Try Men’s Souls and Valley Forge. Forstchen holds a Ph.D. in History from Purdue University, with specializations in military history and the history of technology. He is currently a Faculty Fellow and Professor of History at Montreat College, near Asheville North Carolina. He is a pilot and flies an original WWII recon "warbird." He resides near Asheville with his daughter Meghan.

“Surely to become another popular book for Gingrich and Forstchen.” —Publishers Weekly