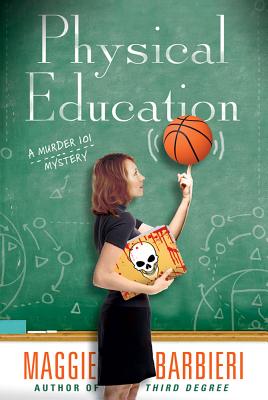 College English professor and sometime amateur sleuth Alison Bergeron would've been thrilled to hear that her husband, NYPD Detective Bobby Crawford, was leaving Homicide if that were the whole story, but it turns out that Bobby's next assignment is even worse---undercover. As if worrying about his involvement in a case he won't talk about at all wasn't bad enough, Alison is forced to take over the women's basketball team at St. Thomas after the coach dies of a heart attack during a game. She may not know much about basketball, but she's no stranger to sleuthing, and it isn't long before she suspects that the coach's death may be more than unexpected but premeditated as well.

With Bobby deep undercover and Alison always on her way to deep trouble, it's only a matter of time before they run smack into each other in Physical Education, the latest in Maggie Barbieri's charming Murder 101 mystery series.

MAGGIE BARBIERI is a freelance editor as well as a mystery novelist. Her father was a member of the NYPD, and his stories provide much of the background for her novels.

“Cute and cozy . . . Barbieri, the daughter of an NYC cop, has a nice, light touch with a procedural.” —Daily News (New York) on Final Exam

“The secret to a good mystery series is an appealing character. . . . Maggie Barbieri came up with a winner in her first book, and her amateur sleuth, Alison Bergeron, is still provoking laughs. . . . What follows is a romp, a serious situation, and a study of what it's like to be young and stupid. Barbieri aces this exam.” —Richmond Times-Dispatch on Final Exam

“Mystery, romance, and humor blend seamlessly. . . . Reminiscent of the Plum series, this one is not to be missed.” —RT Book Reviews (Top Pick!) on Quick Study