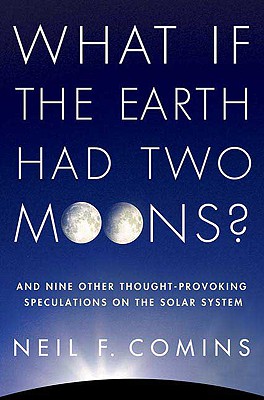 What If the Earth Had Two Moons? (Hardcover)

And Nine Other Thought-Provoking Speculations on the Solar System

“What if?” questions stimulate people to think in new ways, to refresh old ideas, and to make new discoveries. In What If the Earth Had Two Moons, Neil Comins leads us on a fascinating ten-world journey as we explore what our planet would be like under alternative astronomical conditions. In each case, the Earth would be different, often in surprising ways.

The title chapter, for example, gives us a second moon orbiting closer to Earth than the one we have now. The night sky is a lot brighter, but that won’t last forever. Eventually the moons collide, with one extra-massive moon emerging after a period during which Earth sports a Saturn-like ring.

This and nine and other speculative essays provide us with insights into the Earth as it exists today, while shedding new light on the burgeoning search for life on planets orbiting other stars.

Appealing to adult and young adult readers alike, this book follows on the author’s previous bestseller, What If the Moon Didn’t Exist?, with completely new scenarios backed by the latest astronomical research.

Neil F. Comins is a professor of physics and astronomy at the University of Maine and author of popular scientific books, articles, and textbooks. He earned a Bachelor of Science degree from Cornell and a Ph.D. in astrophysics from University College, Cardiff, Wales.

Praise For What If the Earth Had Two Moons?: And Nine Other Thought-Provoking Speculations on the Solar System…

"Armchair astronomers and hard SF fans who love a good game of cosmological What If? will find this an entertaining follow-up to physicist Comins's WhatIf the Moon Didn't Exist? Here he presents 10 more intellectual puzzles that explore new worlds, and imagine what life there might be like. Each chapter opens with a vivid glimpse of a hypothetical new world ... This is a lucid, thoroughly accessible presentation of what might have been that is sure to make this volume as popular as its predecessor."--Publisher's Weekly "Stretching his scientific imagination, Comins tweaks the astronomical dials that control evolution on Earth, such as the length of the day, the height of the tides, or plate tectonics ... An astronomy professor and author of several successful science books (What If the Earth Had No Moon? 1993), Comins plays out his scenarios in physics-grounded narratives that all posit the same result despite different evolutionary paths: the rise of humans. Depicted in fictional predicaments that preface each chapter, they, warming up Comins’ factual explanations, create sf crossover appeal for this entertaining piece of popular science."--Gilbert Taylor, Booklist