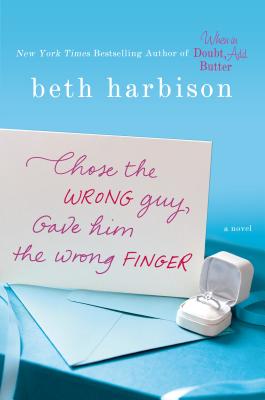 Chose the Wrong Guy, Gave Him the Wrong Finger (Hardcover)

From Beth Harbison, the New York Times bestselling author of "When in Doubt, Add Butter" and "Shoe Addicts Anonymous, " comes "Chose the Wrong Guy, Gave Him the Wrong Finger," a delightful new novel that will make you look at second chances in a whole new way.

Ten years ago, Quinn Barton was on her way to the altar to marry Burke Morrison, her high school sweetheart, when something derailed her. Rather, some"one "derailed her the Best Man who at the last minute begged her to reconsider the marriage. He told her that Burke had been cheating on her. For a long time. Quinn, stunned, hurt, and confused, struggled with the obligation of fulfilling her guests' expectations providing a wedding and running for her life.

She chose running. With the Best Man. Who happened to be Burke's brother, Frank.

That relationship didn't work either. How could it, when Quinn had been engaged to, "in love with, "Frank's brother? Quinn opted for neither, and, instead, spends the next seventeen years working in her family's Middleburg, Virginia, bridal shop, "Talk of the Gown," where she subconsciously does penance for the disservice she did to marriage.

But when the two men return to town for another wedding, old anger, hurt, and passion resurface. Just because you've traded the good guy for the bad guy for "no "guy doesn't mean you have to stay away from love for the rest of your life, does it? Told with Beth Harbison's flair for humor and heart, "Chose the Wrong Guy "will keep you guessing and make you believe in the possibilities of love.

BETH HARBISON is The New York Times bestselling author of When in Doubt, Add Butter; Always Something There To Remind Me; Thin, Rich, Pretty; Hope In A Jar; Secrets of a Shoe Addict and Shoe Addicts Anonymous. She grew up in Potomac, Maryland, outside Washington, D.C., and now shares her time between that suburb, New York City and a quiet home on the eastern shore.

Praise For Chose the Wrong Guy, Gave Him the Wrong Finger…

“Harbison dazzles in her latest, a perfect blend of chick lit and women’s fiction . . . Absolutely first-rate.” —Publishers Weekly (starred) on When in Doubt, Add Butter

"Delicious, just like dessert."—People Magazine on When in Doubt, Add Butter

"Touching, truthful, and profoundly satisfying, Harbison delivers her finest work yet." —Jen Lancaster, New York Times bestselling author of Jeneration X on Always Something There to Remind Me

“Harbison continues to wow readers with her charm and genuine characters.”
—Booklist on Hope in a Jar

"Harbison serves up a deliciously light blend of 1980s nostalgia and women's fiction...Harbison raises the emotional stakes and gives this story a little more bite without losing her fun, breezy style." –Publishers Weekly on Always Something There To Remind Me

"Harbison's writing is zingy and funny..." –Publishers Weekly on Secrets of a Shoe Addict