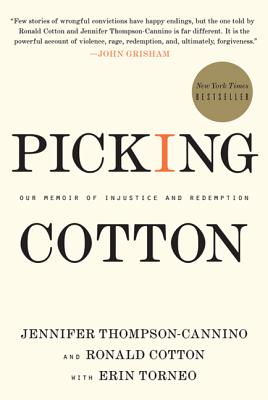 Our Memoir of Injustice and Redemption

“A black man is accused of a terrible crime by a white woman and spends years in prison before being exonerated by DNA evidence. Then, the previously incarcerated man and the victim become friends, team up, and set out on a mission to rescue others falsely accused. No novel tells a story this important or heartrending. Read it!”
— Deal Safrit, Literary Book Post, Salisbury, NC
View the List

The New York Times best selling true story of an unlikely friendship forged between a woman and the man she incorrectly identified as her rapist and sent to prison for 11 years.

Jennifer Thompson was raped at knifepoint by a man who broke into her apartment while she slept. She was able to escape, and eventually positively identified Ronald Cotton as her attacker. Ronald insisted that she was mistaken-- but Jennifer's positive identification was the compelling evidence that put him behind bars.

After eleven years, Ronald was allowed to take a DNA test that proved his innocence. He was released, after serving more than a decade in prison for a crime he never committed. Two years later, Jennifer and Ronald met face to face-- and forged an unlikely friendship that changed both of their lives.

With Picking Cotton, Jennifer and Ronald tell in their own words the harrowing details of their tragedy, and challenge our ideas of memory and judgment while demonstrating the profound nature of human grace and the healing power of forgiveness.

JENNIFER THOMPSON-CANNINO lives in North Carolina with her family. She speaks frequently about the need for judicial reform, and is a member of the North Carolina Actual Innocence Commission, the advisory committee for Active Voices, and the Constitution Project. Her op-eds have appeared in the New York Times, the Durham-Herald Sun, and the Tallahassee Democrat.

RONALD COTTON lives with his wife and daughter in North Carolina. He has spoken at various schools and conferences including Washington and Lee University, University of Nevada Las Vegas, Georgetown Law School, and the Community March for Justice for Troy Anthony Davis in Savannah, GA.

ERIN TORNEO is a Los Angeles-based writer. She was a 2007 New York Foundation for the Arts Nonfiction Fellow.

Praise For Picking Cotton: Our Memoir of Injustice and Redemption…

“Few stories of wrongful convictions have happy endings, but the one told by Ronald Cotton and Jennifer Thompson-Cannino is far different. It is the powerful account of violence, rage, redemption, and, ultimately, forgiveness.” —John Grisham

“The story of Jennifer Thompson-Cannino and Ronald Cotton, as told in first-person voices in this gripping, well-written book, is exceptional.” —St. Petersburg Times

“Even the most cynical reader will be impressed with Cotton's resilience and grace.” —The Washington Post

“Picking Cotton is the nonfiction title you must not overlook this year. It is as compelling as any fiction, yet the truth at its core will move you to tears.” —The Louisville Courier-Journal

“Picking Cotton is ultimately an uplifting story of hope.” —The Charlotte Observer

“Few stories of wrongful convictions have happy endings, but the one told by Ronald Cotton and Jennifer Cannino is far different. It is the powerful account of violence, rage, redemption, and, ultimately, forgiveness.” —John Grisham

“This book will break your heart and lift it up again...a touching and beautiful example of the power of faith and forgiveness. Its message of hope should reverberate far beyond the halls of justice.” —Sr. Helen Prejean, csj, author of Dead Man Walking

“What happened in this book will change what you think of the criminal justice system in this country, and challenge you to help fix it. Each of them tells an extraordinary story about crime, punishment and exoneration, but it's their shared spiritual journey toward reconciliation and forgiveness that is even more compelling and profound.” —Barry C. Scheck, Co-Founder and Co-Director of The Innocence Project®

“Few people have done more to put a human face on issues involving wrongful convictions than Jennifer Thompson-Cannino and Ronald Cotton. Yet through their shared pain, they have been able to forge a friendship that most of us search our lives for.” —Janet Reno, Former U.S. Attorney General