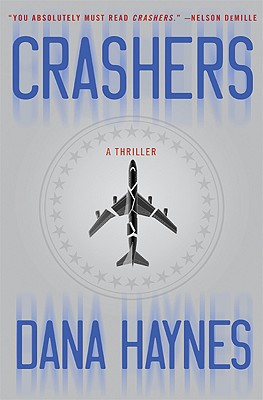 “Cascade Air 818 left Portland on a routine flight to Los Angeles, but it never arrived. Now pieces of the plane litter the Oregon countryside, and it would appear that this was just a dress rehearsal. Back in Portland the National Transportation Safety Board team swings into action, unaware that there's only 72 hours left until a ruthless opportunist crashes another plane. Fast, topical and downright scary, this is also a fascinating glimpse into how the NTSB operates.”
— Paula Longhurst, The King's English, Salt Lake City, UT
View the List

Whenever a plane goes down in the U.S., a "Go Team" made up of experts is assembled by the NTSB to investigate. Those people - each of them a leading expert in a specific area  - are known as informally as "Crashers."

When a passenger plane, a Vermeer One Eleven, slams into the ground outside Portland, Oregon, a team is quickly assembled to investigate the cause.  Under the leadership of the IIC (Investigator in Charge), Leonard "Tommy" Tomzak, a pathologist who recently quit the NTSB who also happened to be in the area when the Vermeer One Eleven went down, the team gets to work as fast as possible. Assembled by Susan Tanaka, the inter-governmental liason from the NTSB on this crash, the team includes: Kathryn "Kiki" Duvall (voice recorder specialist), known as a"sonar witch" who can hear things that others can't and can pinpoint an accent from anywhere in the world; John Roby (Mad Bomber), former cop and bomb expert, who can detect the use of an incendiary device simply by smelling the air; Walter Mulroney (Structures), looks more like a cowboy than an engineer but can rebuild just about any plane from the bolts up; along with Peter Kim (Power Plant) and Isaiah Grey (Operations).  Usually the team has months to determine the cause of a crash. But this time it's different. This time, the plane was brought down deliberately, without leaving a trace, and this was only a trial run.

In LA, Daria Gibron - a former Shin Bet agent, now under the protection of the FBI- spots a group of suspicious-looking men. Missing her former life of action, she attaches herself to them only to learn that, somehow, they were responsbie for the plane crash and are preparing for another action. While her FBI handler tries to find her and save her, Daria risks her life to try to get close enough to learn what's going on and thwart the coming terrorist action. But time is running out and her cover story is running thin.

A fresh and utterly compelling thriller, an original mix of action, investigation and a brilliant cast of characters that grabs the reader in the way few novels can and fewer do.

“You absolutely must read Crashers.  I literally couldn’t put this book down. Dana Haynes is a gifted writer who grabs you on page one and doesn’t let you go until the final page. This is going to be one of the best and most breathless reads of the summer.” --Nelson DeMille, author of The Lion

“Outstanding! Crashers combines the ferocious action you usually see on a movie screen with a fascinating look at the way a major airline crash is investigated. Crashers is guaranteed to be one of the year’s best thrillers.” -- Phillip Margolin, author of Supreme Justice

“Imagine an entire season of “24” crammed into a single book. That’s what you get with Crashers, a fast-paced, twisty thriller that just begging to be made into a movie.” --April Henry, co-author of Face of Betrayal and Hand of Fate

“Crashers is a supersonic jet of a thriller, loaded with compelling detail and page-turning suspense and action.” --Jeff Abbott, author of Panic and Trust Me

“Dana Haynes delivers big-time with Crashers, a spectacular, timely, un-put-downable, near-perfect thriller whose every page sizzles with action, intrigue, information and intelligence.  If you’re a thriller fan, or even just a lover of fine writing and terrific story-telling, do yourself a favor and buy this book.” --John Lescroart, author of Betrayal

Dana Haynes was, for more than twenty years, a journalist and editor at several newspapers in Oregon. Under the name Conrad Haynes, he published three traditional mysteries in the late '80s. He works for a local community college and lives in Portland, Oregon. "Crashers" is his first thriller.
Loading...
or
Not Currently Available for Direct Purchase