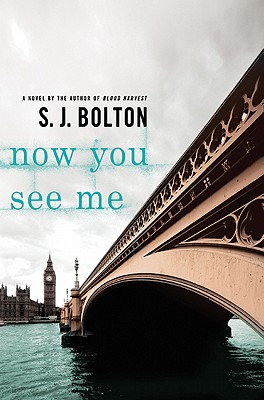 Now You See Me

One night after interviewing a reluctant witness at a London apartment complex, Lacey Flint, a young detective constable, stumbles onto a woman brutally stabbed just moments before in the building’s darkened parking lot. Within twenty-four hours a reporter receives an anonymous letter that points out alarming similarities between the murder and Jack the Ripper’s first murder—a letter that calls out Lacey by name. If it’s real, and they have a killer bent on re-creating London’s bloody past, history shows they have just five days until the next attempt.

No one believes the connections are anything more than a sadistic killer’s game, not even Lacey, whom the killer seems to be taunting specifically. However, as they investigate the details of the case start reminding her more and more of a part of her past she’d rather keep hidden. And the only way to do that is to catch the killer herself.

Fast paced and completely riveting, S. J. Bolton’s Now You See Me is a modern gothic novel that is nothing less than a masterpiece of suspense fiction.


Now You See Me is a Kirkus Reviews Best of 2011 Mysteries title.

One of Library Journal's Best Mystery Books of 2011

Praise For Now You See Me…

“Before she published Blood Harvest, S. J. Bolton wrote two mysteries. The first (Sacrifice) was terrific; the second (Awakening) was even better; and Blood Harvest is, not to put too fine a word on it, outstanding. . . . All the ingredients for a top-notch psychological mystery by a novelist who adroitly melds the natural and (possibly) supernatural into a spine-tingling gothic thriller. Fans of Barbara Vine, Mary Stewart, Daphne du Maurier, and Dorothy Eden shouldn’t miss this one.”
—Nancy Pearl, NPR’s Morning Edition, on Blood Harvest

“Coronation of the new queen of thrillers: S. J. Bolton . . . Everyone, male or female, will love Bolton. There is nothing not to love. Endowed with the ability to write beautiful prose that packs a punch, Bolton also creates intriguing characters (good and evil), and twists them all together in chilling and clever plots. Her novels are lush with creepy British atmosphere (Bolton draws on her extensive knowledge of British folklore, mythology, and history), heavy with ideas that set the mind humming (fate, destiny, and the roles played by women and men in the unfolding of both), and vibrant with fast-paced action that alternates between subtle and amplified.”
—The Huffington Post on Blood Harvest

“This riveting debut novel . . . just might be the page-turner of the summer. . . . It’s been a long time since we’ve devoured a book this length at one sitting. . . . We were just grateful to find ourselves in the hands of as extraordinary a storyteller as S. J. Bolton.”
—The Denver Post on Sacrifice

SHARON BOLTON is a Mary Higgins Clark Award winner and an ITW Thriller Award, CWA Gold Dagger, and Barry Award nominee. Her fascination with British folklore, especially the dark and haunting side of those legends, fuels her writing. She grew up in Lancashire, England, and now lives near Oxford with her family. This is her fourth novel. Sharon Bolton was previously published as S.J. Bolton.
Loading...
or
Not Currently Available for Direct Purchase