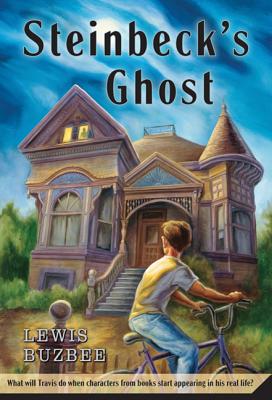 It's been two months since Travis's family moved from their shabby old house to a development so new that it seems totally unreal. There's one place, though, where Travis can still connect with his old life: the Salinas library. Travis and his family used to go there together every Saturday, but now he bikes to it alone, re-reading his favorite books: the works of John Steinbeck. Suddenly Travis is seeing Steinbeck's characters come to life. There's the homeless man in the alley behind the library, the boy who writes by night in an attic bedroom. Travis has met them before—as a reader. But how can they be here now? And why?

“The themes of valuing friendship, managing adults who have lost their priorities, and connecting people through stories will appeal to kids who have found their own magic in the library.” —The Bulletin of the Center for Children's Books

“The second half of the book is the most absorbing…. [The protagonist] is well drawn. This novel would have greatest appeal to readers familiar with Steinbeck's works.” —School Library Journal

“The story remains an intriguing introduction/companion to Steinbeck's works and imaginatively conveys the power of literature to transport people to another time and place.” —Publishers Weekly

“Buzbee's love for literature and libraries is infectious and, for those similarly inclined, deeply satisfying.” —Booklist

“A delectable feast…. I cannot remember when I have read a book with such delight.” —Paul Yamazaki, City Lights Bookstore on The Yellow-Lighted Bookshop

Lewis Buzbee is a former bookseller and sales rep (for Chronicle Books), and the author of the acclaimed adult memoir, The Yellow-Lighted Bookshop, published by Graywolf Press in June 2006. A native Californian, he lives in San Francisco with his wife and daughter. He is the author of the children's books Steinbeck's Ghost, The Haunting of Charles Dickens, and Bridge of Time.
Loading...
or support indie stores by buying on