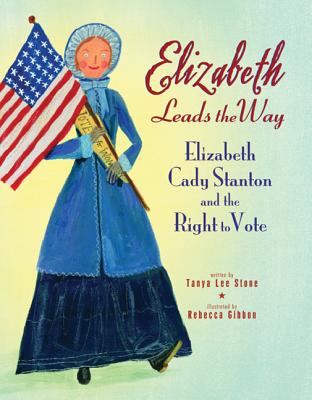 Elizabeth Cady Stanton and the Right to Vote

Elizabeth Cady Stanton stood up and fought for what she believed in. From an early age, she knew that women were not given rights equal to men. But rather than accept her lesser status, Elizabeth went to college and later gathered other like-minded women to challenge the right to vote.Here is the inspiring story of an extraordinary woman who changed America forever because she wouldn't take "no" for an answer.

Elizabeth Leads the Way is a 2009 Bank Street - Best Children's Book of the Year.


Praise For Elizabeth Leads the Way: Elizabeth Cady Stanton and the Right to Vote…

“This biography brims with upbeat energy as the spirited woman sets out to change the system--an energy amplified by Rebecca Gibbon's bright folk art-styled pictures.” —The Washington Post

“A short, incisive biography . . . the cameos of action, matched by full-page pictures, make the history accessible. A must for library shelves.” —Booklist, Starred Review

“[This book] fires up readers with a portrait of the 19th-century feminist Elizabeth Cady Stanton. . . . The sometimes informational tone is animated and energized by Gibbon's plentiful vignettes and paintings, rendered in a vibrant folk-art style.” —Publishers Weekly

“Through words and pictures that work together and an emphasis on ideas and personality rather than factoids, this well-conceived introduction is just right for a young audience.” —School Library Journal

“In lively prose well-matched by Gibbon's irrepressible images, Stone tells the story of suffragist Elizabeth Cady Stanton. . . . A fine introduction for very young readers to the woman and her key role in American history.” —Kirkus Reviews

Rebecca Gibbon is the illustrator of several picture books, including Elizabeth Leads the Way, which was named an ALA Notable Book among other honors. She lives in England with her husband and two young children.
or support indie stores by buying on