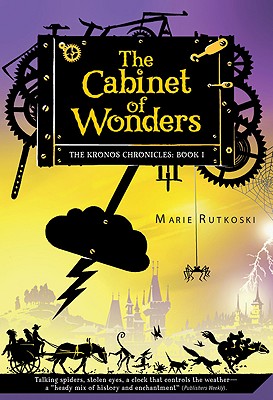 Petra Kronos has a simple, happy life. But it’s never been ordinary. She has a pet tin spider named Astrophil who likes to hide in her snarled hair and give her advice. Her best friend can trap lightning inside a glass sphere. Petra also has a father in faraway Prague who is able to move metal with his mind. He has been commissioned by the prince of Bohemia to build the world’s finest astronomical clock. Petra’s life is forever changed when, one day, her father returns home – blind. The prince has stolen his eyes, enchanted them, and now wears them. But why? Petra doesn’t know, but she knows this: she will go to Prague, sneak into Salamander Castle, and steal her father’s eyes back. Joining forces with Neel, whose fingers extend into invisible ghosts that pick locks and pockets, Petra finds that many people in the castle are not what they seem, and that her father’s clock has powers capable of destroying their world. This startling debut novel, about the risks we take to protect those we love, brims with magic, political intrigue, and heroism.  The Cabinet of Wonders is a 2009 Bank Street - Best Children's Book of the Year.

“Readers . . . who enjoy literary fantasy are likely to savor Marie Rutkoski’s debut novel, which was inspired by the grisly legend associated with the famous astronomical clock in Prague’s Old Town Square.” —The Wall Street Journal


“Like Phillip Pullman's young Lyra, [Petra] matures in worlds more complex than she had imagined.” —The Chicago Tribune


“For those who like their fantasy with a splash of history, or their history with a twist of magic, this book is ideal.” —School Library Journal


“Rutkoski poses searching questions about perception and judgment, and plants plenty of seeds for future installments, but this first novel of adventure, loyalty and familial love (not to mention magic) wraps up quite satisfyingly.” —Shelf Awareness


“The Cabinet of Wonders is just that—a book to get lost in, to be amazed and astonished by, to explore with curiosity and delight.” —Books & Books, Miami, Florida

“Though Rutkoski wraps up her magical tale beautifully, her lovable cast and intriguing scenarios are certain to bring readers back for a second round in The Kronos Chronicles.”—BookPage

"It was like a mix of Harry Potter and Lord of the Rings."— A YALSA YA Galley Teen Reader

Marie Rutkoski is the author of "The Kronos Chronicles." "The Cabinet of Wonders" was her debut novel and was named an Indie Next Kids' List Great Read and a Bank Street Best Children's Book of the Year, among other honors. Rutkoski grew up in Bolingbrook, Illinois (a suburb of Chicago), as the oldest of four children. She attended the University of Iowa, where she took Writers' Workshop classes and studied with Pulitzer Prize-winner James Alan McPherson. After graduating, she lived in Moscow and Prague. Upon receiving her Ph.D. from Harvard University, she held dual appointments as a lecturer there in both English and American Literature and Language, and History and Literature. Rutkoski is currently a professor at Brooklyn College, where she teaches Renaissance Drama, children's literature and creative writing. She lives in New York City.
Loading...
or
Not Currently Available for Direct Purchase