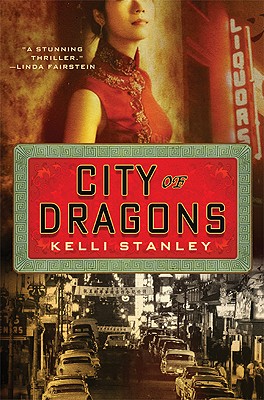 February, 1940. In San Francisco's Chinatown, fireworks explode as the city celebrates Chinese New Year with a Rice Bowl Party, a three day-and-night carnival designed to raise money and support for China war relief. Miranda Corbie is a 33-year-old private investigator who stumbles upon the fatally shot body of Eddie Takahashi. The Chamber of Commerce wants it covered up. The cops acquiesce. All Miranda wants is justice--whatever it costs. From Chinatown tenements, to a tattered tailor's shop in Little Osaka, to a high-class bordello draped in Southern Gothic, she shakes down the city--her city--seeking the truth. An outstanding series debut.


Praise For City of Dragons…

"Beautifully imagined and beautifully written--this book does everything great fiction is supposed to."
- Lee Child "A stunning recreation of time and place that I greatly enjoyed...as will everyone who reads it."
- Robert B. Parker
"Big and ambitious, both reverent and original. Author Kelli Stanley has her eye on greatness."- George Pelecanos

"A powerful crime novel that perfectly captures the noir mood of San Francisco in the 40's. Stanley's dialogue bristles with attitude, the atmosphere is thick as the bay fog, and her protagonist is a great new dame in crime fiction. A smart, stunning thriller."
- Linda Fairstein

"Evocative and taut…bursts with dark atmosphere. Fans of Raymond Chandler and Megan Abbott should add Stanley to their list of must-read authors."
- Tasha Alexander

"Blew me to ribbons. From the opening chapter, we're rooting for Miranda, a marvelous, feisty, compassionate heroine who is my favorite P.I. to come down the mean streets in oh, so long. Polish up the Shamus, I know where it's heading this year."
- Ken Bruen

"Stunning, pitch-perfect noir...conjures forth a lost, poignant, and darkly luminous San Francisco in which Hammett - and LA's Chandler - would feel immediately at home."
- Cornelia Read, author of A Field of Darkness


"Come...rush headlong into 1940's San Francisco. You'll be smoking two packs of Chesterfields and drinking Old Taylor straight from the bottle by the time you're done. Take a sip. I dare you."
- Louise Ure, Shamus Award-winning author of The Fault Tree

"One of my favorite novels of all time. Watch out, Sam Spade, Miranda Corbie is a woman hardboiled and feminine enough to keep you in line!"
- Rebecca Cantrell, author of A Trace of Smoke

"An explosive, important book...imbued with the colors, sounds, emotions and excitement of true history. The best part is an ending that will blow you away."
- Laura Benedict, author of Isabella Moon

KELLI STANLEY's first novel in the 1940 San Francisco-set Miranda Corbie series, CITY OF DRAGONS, was met with overwhelming critical acclaim and was a finalist for the prestigious Los Angeles Times Book Prize. Stanley also writes a highly-praised series set in Roman Britain, the latest of which is THE CURSE-MAKER. Her debut novel, NOX DORMIENDA, won the Bruce Alexander Award for best historical mystery of 2008. She makes her home in Dashiell Hammett's San Francisco, earned a Master's Degree in Classics, and loves jazz, old movies, fedoras, Art Deco and speakeasies.
Loading...
or
Not Currently Available for Direct Purchase