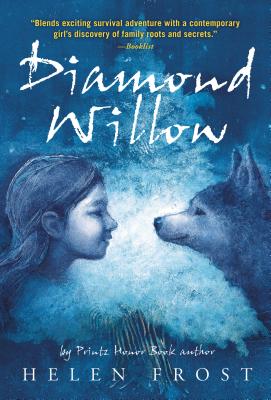 There's
more to me than
most people
see.

Twelve-year-old Willow would rather blend in than stick out. But she still wants to be seen for who she is. She wants her parents to notice that she is growing up. She wants her best friend to like her better than she likes a certain boy. She wants, more than anything, to mush the dogs out to her grandparents' house, by herself, with Roxy in the lead. But sometimes when it's just you, one mistake can have frightening consequences . . . And when Willow stumbles, it takes a surprising group of friends to help her make things right again.

Using diamond-shaped poems inspired by forms found in polished diamond willow sticks, Helen Frost tells the moving story of Willow and her family. Hidden messages within each diamond carry the reader further, into feelings Willow doesn't reveal even to herself.
Diamond Willow is a 2009 Bank Street - Best Children's Book of the Year.

“Frost invents an ingenious poetic form for her story that is both stable and fluid; like the diamond willow branches that she is imitating, the diamond shapes of her poems vary. . . . Frost has spun metaphoric gold out of an evocative natural landscape, and she knows just how to craft it into an elegant and moving story of a young girl's deepening understanding of the relationships she shares with those around her.” —The Bulletin for Center of Children's Books, Starred Review

“This complex and elegant novel will resonate with readers who savor powerful drama and multifaceted characters.” —School Library Journal

“Set in a remote part of Alaska, this story in easy-to-read verse blends exciting survival adventure with a contemporary girl's discovery of family roots and secrets.” —Booklist

“This delightful novel is a must-read.” —VOYA

“Frost presents her story in a series of poems in Willow's voice, using a form inspired by the marks on a diamond willow stick.” —Kirkus Reviews

“Twelve-year-old Willow longs to take the family's beloved sled dogs on her first solo run to her grandparents' cabin. Inspired by gifts created from diamond willow, Helen Frost has composed unique diamond-shaped poems that reveal the touching story of Willow, her immediate family, and her ancestors, whose spirits reside in many of the animals of the Alaskan wilderness she encounters.” —Tish Gayle, The Blue Marble Bookstore, Fort Thomas, KY

“As it takes us gliding along on a dogsled with Willow into the depths of the snowy Alaskan interior, Diamond Willow illustrates oneness, forgiveness, joyfulness, and how a child can sometimes teach her parents well.” —Richie's Picks