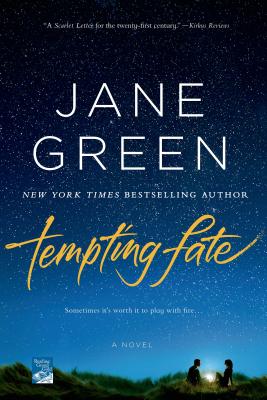 What is a woman's greatest temptation? How far will she go to find fulfillment—and how much is she willing to lose? Tempting Fate is an unforgettable, enthralling novel about the risks and rewards of "having it all" from beloved New York Times bestselling author Jane Green.

Gabby and Elliott have been happily married for eighteen years. They have two daughters. They have a beautiful, loving home. Forty-three-year-old Gabby is the last person to have an affair. She can't relate to the way her friends desperately try to cling to the beauty and allure of their younger years. And yet she too knows her youth is quickly slipping away. She could never imagine how good it would feel to have a handsome younger man show interest in her…until the night it happens. Matt makes Gabby feel sparkling, fascinating, alive—something she hasn't felt in years. What begins as a long-distance friendship soon develops into an emotional affair. Intoxicated, she has no choice but to step ever deeper into the allure of attraction and attention, never foreseeing the life-changing consequences that lie ahead. If she makes one wrong move, she could lose everything—and find out what really matters most.

Praise For Tempting Fate: A Novel…

“A Scarlet Letter for the twenty-first century.” —Kirkus Reviews

“Green once more proves her skill at exploring the complexities of the human heart. This is a sure bet for her fans and new readers who enjoy well-written women's fiction.” —Library Journal, starred review

“If you're in the mood for a juicy, heartbreaking page-turner, you should definitely give it a try.” —OKMagazine.com

“Her compelling tale reflects an understanding of contemporary women that's acute and compassionate, served up with style.” —People magazine