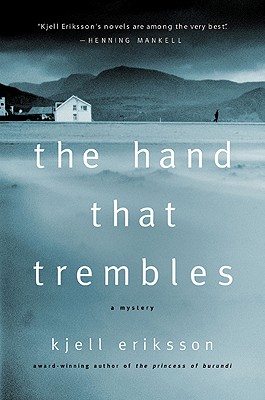 The Hand That Trembles

"Kjell Eriksson's crime novels are among the very best." "--"Henning Mankell A Swedish county commissioner walks out of a high-level meeting and disappears. Many years later, one of the town's natives is convinced that he's caught a glimpse of the missing man while traveling in Bangalore, India. When the rumors reach his hometown, a veteran police officer stumbles across a seemingly unrelated case. Ann Lindell, Eriksson's series detective, must investigate a severed female foot found where a striking number of inhabitants are single men. But the owner of the house where the victim believed to have lived is no longer able to answer any questions....

Praise For The Hand That Trembles: A Mystery…

“The disappearance of a small-town politician masks dark secrets and triggers a series of further crimes… A challenging and rewarding mystery.”
--Kirkus Reviews

“Stunning, haunting…can chill you to the bone.”—Marilyn Stasio, The New York Times Book Review on The Princess of Burundi

“Riveting in tone and spirit. . . resembles the books of Maj Sjowall and Per Wahloo, not to mention those of the modern master Henning Mankell.”—The Wall Street Journal on The Princess of Burundi

“A brilliant, haunting work of psychological obsession.”--The Globe and Mail on The Cruel Stars of the Night

“Reminiscent of Ruth Rendell. As insightful and intelligent as it is engrossing.”--Library Journal on The Cruel Stars of the Night

“Ingenious…Very satisfying.” --Los Angeles Times on The Princess of Burundi

KJELL ERIKSSON is the author of the internationally acclaimed The Princess of Burundi, The Cruel Stars of the Night, and The Demon of Dakar. His series debut won Best First Novel 1999 by the Swedish Crime Academy, an accomplishment he later followed up by winning Best Swedish Crime Novel 2002 for The Princess of Burundi. "The Hand That Trembles" is his fourth novel in the series; he lives in Sweden.
Loading...
or
Not Currently Available for Direct Purchase