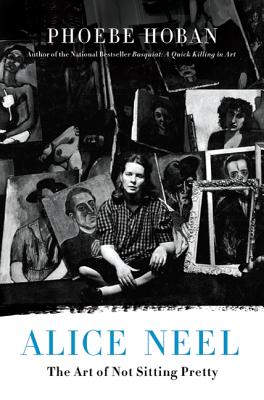 The Art of Not Sitting Pretty

Alice Neel liked to say that she "was" the century and in many ways she was. She was born into a proper Victorian family, and came of age during suffrage. The quintessential Bohemian, she spent more than half a century, from her early days as a WPA artist living in the heart of the Village, through her Whitney retrospective in 1974, until her death ten years later, painting, often in near-obscurity, an extraordinarily diverse population from young black sisters in Harlem to the elderly Jewish twin artists, Raphael and Moses Soyer, to Meyer Schapiro and Linus Pauling, to the American Communist Party chairman Gus Hall creating an indelible portrait of 20th century America.

Neel's hundreds of portraits portray a universe of powerful personalities and document an age. Neel painted through the Depression, McCarthyism, the Civil Rights Movement, the sexual revolution of the 60's, feminism, and the feverish eighties. Fiercely democratic in her subjects, she portrayed her lovers, her children, her neighbors in Spanish Harlem, pregnant nudes, crazy people, and famous figures in the art world, all in a searing, psychological style uniquely her own. From Village legend Joe Gould with multiple penises to Frank O'Hara as a lyrical young poet, from porn star Annie Sprinkle gussied up in leather, to her own anxious, nude pregnant daughter-in-law, Neel's portraits are as arrestingly executed as they are relentlessly honest.

In this first full-length biography of Neel, best-selling author Phoebe Hoban recounts the remarkable story of Neel's life and career, as full of Sturm and Drang as the century she powerfully captured in paint. Neel managed to transcend her often tragic circumstances, surviving the death from diphtheria of her infant daughter Santillana, her first child by the renowned Cuban painter Carlos Enriquez, with whom she lived in Havana for a year before returning to America; the break-up of her marriage; a nervous breakdown at thirty resulting in several suicide attempts for which she was institutionalized; and the terrible separation from her second child, Isabetta, whom Carlos took back to Havana.

In every aspect of her life, Neel dictated her own terms from defiantly painting figurative pieces at the height of Abstract Expressionism, convincing her subjects to disrobe (which many of them did, including, surprisingly, Andy Warhol) to becoming a single mother to the two sons she bore to dramatically different partners. No wonder she became the de facto artist of the Feminist movement. (When "Time "magazine put Kate Millet on its cover in 1970, she was asked to paint the portrait.) Very much in touch with her time, Neel was also always ahead of it. Although she herself would probably have rejected such label, she was America's first feminist, multicultural artist, a populist painter for the ages.

Phoebe Hoban's "Alice Neel: The Art of Not Sitting Pretty" tells the unforgettable story of a woman who forged a permanent place in the pantheon by courageously flaunting convention, both in her life and her work.

PHOEBE HOBAN is the bestselling author of Basquiat: A Quick Killing in Art. She has written about culture and the arts for Vogue, Vanity Fair, GQ, Harper's Bazaar, New York Magazine, The New York Times, GQ and multiple other publications. She lives in New York City.

Praise For Alice Neel: The Art of Not Sitting Pretty…

"Phoebe Hoban's biography of Alice Neel: The Art of Not Sitting Pretty is terrific. It is not only an engrossing narrative, it's Hoban's singular achievement that she gives both an appreciation of Neel's provocative art and a deep compassion for Neel the woman, too."--Patricia Bosworth author of DIANE ARBUS, a biography

“Phoebe Hoban’s biography of the iconoclast Alice Neel, rich in details and highly readable, should do much to establish Neel for a new generation as a powerful figurative painter and counter-figure to the male-dominated world of the Abstract Expressionists. What emerges here is the compelling tale of a proto-feminist, pre-hippie hippie and uncompromising artist who only towards the end of her career received widespread recognition, most notably from her portrait of  Kate Millet on the cover of Time, which became the face of women’s liberation.”--Annalyn Swan, co-author of de Kooning: An American Master