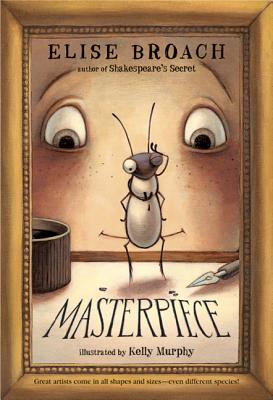 Marvin lives with his family under the kitchen sink in the Pompadays' apartment. He is very much a beetle. James Pompaday lives with his family in New York City. He is very much an eleven-year-old boy. After James gets a pen-and-ink set for his birthday, Marvin surprises him by creating an elaborate miniature drawing. James gets all the credit for the picture and before these unlikely friends know it they are caught up in a staged art heist at the Metropolitan Museum of Art that could help recover a famous drawing by Albrecht Dürer. But James can't go through with the plan without Marvin's help. And that's where things get really complicated (and interesting!). This fast-paced mystery will have young readers on the edge of their seats as they root for boy and beetle.

Masterpiece is a 2009 Bank Street - Best Children's Book of the Year.

“Delightful intricacies of beetle life ... blend seamlessly with the suspenseful caper as well as the sentimental story of a complicated-but-rewarding friendship ... Murphy's charming pen-and-ink drawings populate the short chapters of this funny, winsome novel.” —Kirkus Reviews

“This marvelous story is sure to be a hit.” —School Library Journal

Kelly Murphy has illustrated many books for children including Masterpiece, Alex and the Amazing Time Machine, and the Nathaniel Fludd, Beastologist books. She lives in Providence, Rhode Island.
Loading...
or support indie stores by buying on