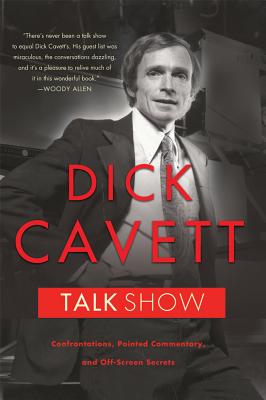 "There's never been a talk show to equal Dick Cavett's... It's a pleasure to relive much of it in this wonderful book."—Woody Allen

For years, Dick Cavett played host to the nation's most famous personalities on his late-night talk show. In this humorous and evocative book, we get to hear Cavett's best tales, as he recounts great moments with the legendary entertainers who crossed his path and offers his own trenchant commentary on contemporary American culture and politics. Pull up a chair and listen to Cavett's stories about one-upping Bette Davis, testifying on behalf of John Lennon, confronting Richard Nixon, scheming with John Updike, befriending William F. Buckley, and palling around with Groucho Marx. Sprinkled in are tales of his childhood in Nebraska in the 1940s and 1950s, where he honed his sense of comic timing and his love of magic.

Cavett is also a wry cultural observer, looking at America today and pointing out the foibles that we so often fail to notice about ourselves. And don't even get him started on politicians. A generation of Americans ended their evenings in Dick Cavett's company; Talk Show is a way to welcome him back.

Dick Cavett was the host of The Dick Cavett Show on ABC and PBS, and he also hosted talk shows on the USA, HBO, and CNBC cable networks. He appears frequently on stage, screen, and new media, and he was nominated for his most recent Emmy Award in 2012. He is the author of Talk Show and the coauthor of Cavett and Eye on Cavett, and he writes an online opinion column for The New York Times. He lives in New York City and Montauk, New York.

“Breezy, incisive and amusing--nice to have you back, Dick.” —Kirkus Reviews

“In his beguiling profiles of celebrities . . . Cavett proves himself a solid writer as well as a talker.” —Publishers Weekly

“There's never been a talk show to equal Dick Cavett's. His guest list was miraculous, the conversations dazzling, and it's a pleasure to relive much of it in this wonderful book.” —Woody Allen