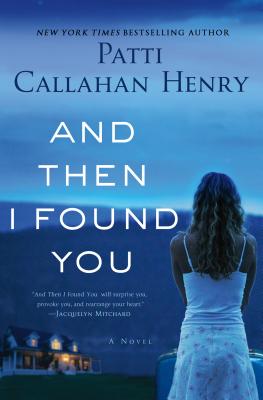 And Then I Found You

When the mistakes have been made and the running is over, it's time to face the truth. Kate knows this. She understands that a woman can never undo what can never be undone. Yet, for the first time in her life she also knows that she won't fully love until she confronts those from her past. It's time to act.

Can she do it? Can she travel to the place where it all began, to the one who shares her secret? Can the lost ever become found?

"And Then I Found You" gives new life to the phrase "inspired by a true story." By travelling back to a painful time in her own family's history, author Patti Callahan Henry explores the limits of courage, and the price of a selfless act.


Praise For And Then I Found You…

“AND THEN I FOUND YOU is as authentic as it is riveting and ultimately unforgettable. Your past will find you—and it can change your life. I think it’s the most soulful book she’s ever written.”
--Dorothea Benton Frank, author of Porch Lights


“In And Then I Found You Patti Callahan Henry explores the labyrinth of a woman's heart--mother, daughter, sister, friend, lover.  Moving and beautifully written.” --Mary Alice Monroe, author of Beach House Memories

"Patti Callahan Henry has a singular gift----she can connect her characters so deeply to the natural world. She leads Katie Vaughn by moonlight, with a touch as light and deft as a white feather, unafraid to plunge her into the deepest sorrows so that she can emerge changed and beautiful. You can't help but root for Katie. AND THEN I FOUND YOU is Henry at her best, brimming with heart and compassionate wisdom." --Joshilyn Jackson, New York Times bestselling author of A Grown Up Kind of Pretty


"Patti Callahan Henry asks the big, equivocal questions about what it means to be a mother, a child, a family, and the answers she finds in AND THEN I FOUND YOU will surprise you, provoke you, and rearrange your heart." --Jacquelyn Mitchard, author of The Deep End of the Ocean and What We Saw at Night


“Henry writes this story with eloquence and beauty. This is her most personal and her most powerful story to date." –Huffington Post


“A delicious read featuring all of the elements of love, loss and familial tension.” –The Atlantan

Patti Callahan Henry is a New York Times Bestselling novelist. She has written nine novels (Losing the Moon, Where the River Runs, When Light Breaks, Between the Tides, The Art of Keeping Secrets, Driftwood Summer, The Perfect Love Song, Coming up for Air and And Then I Found You). Patti has been hailed as a fresh new voice in southern fiction, appearing in numerous magazines (Good Housekeeping; SKIRT; The South; Southern Living, etc..). She has been short-listed for the Townsend Prize for Fiction. She has been nominated four different times for the Southeastern Independent Booksellers Fiction Novel of the Year. Two of her novels were OKRA picks and Coming up For Air was an Indie Next choice. Patti is a frequent speaker at fundraisers, library events and book festivals, discussing the importance of storytelling. AND THEN I FOUND YOU was released on April, 9th, 2013 by St. Martins Press. Patti Callahan Henry is a full time writer, wife and mother of three living in Mountain Brook, AL.
Loading...
or
Not Currently Available for Direct Purchase