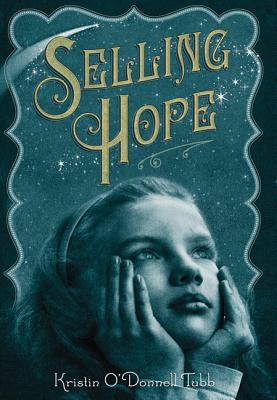 “Thirteen-year-old Hope McDaniels lives and works with a vaudeville troupe that criss-crosses America--and she hates it. She wants to return to Chicago, the town that she and her father left in 1905, when her mother died. To get off the circuit, Hope needs to earn some money fast. Inspired by the imminent visitation of Halley's Comet, Hope begins to sell her very own 'anti-comet pills' with a bit of help from a young man named Buster Keaton. As the comet approaches, Hope begins to question what she really wants, and where her own place is in the universe. This is a coming-of-age story rich with quirky details and lively characters. Just like a vaudeville act, it is half comedy, half drama, and all entertainment.”
— Jocelyn Koehler, Boswell Book Company, Milwaukee, WI
View the List

Selling Hope is an inventive middle grade novel about a girl who wants a normal life and how she sees Halley's Comet as her ticket out of the vaudeville circuit.

It's May 1910, and Halley's Comet is due to pass thru the Earth's atmosphere. And thirteen-year-old Hope McDaniels and her father are due to pass through their hometown of Chicago with their ragtag vaudeville troupe.

Hope wants out of vaudeville, and longs for a "normal" life -- or as normal as life can be without her mother, who died five years before. Hope sees an opportunity: She invents "anti-comet" pills to sell to the working-class customers desperate for protection. Soon, she's joined by a fellow troupe member, young Buster Keaton, and the two of them start to make good money. And just when Hope thinks she has all the answers, she has to decide: What is family? Where is home?

“Tubb deftly ingrains a thoughtful ethical question into the story (is Hope really helping people by assuaging their fears or simply ripping them off?) But never overdoes it in this bouncy tale populated by a terrific cast of characters.” —Booklist, starred review

“Even though readers will anticipate the benign outcome of the fateful date, they'll find themselves drawn in by the countdown to possible doom and intrigued by Tubb's subtle examination of the fine line between offering hope and dealing deceit.” —BCCB

“Tubb's inventive heroine comes across as a female version of familiar characters, such as Gary Paulsen's Harris or Robert Newton Peck's Soup. This homespun tale, full of folksy humor and based on historical fact, will appeal to young fans of Deborah Wiles' and Ruth White's books.” —Booklist for Autumn Winifred Oliver Does Things Different

Kristin O'Donnell Tubb is the author of Autumn Winifred Oliver Does Things Different, Selling Hope, and The 13th Sign. She lives in Tennessee with her family.
Loading...
or support indie stores by buying on