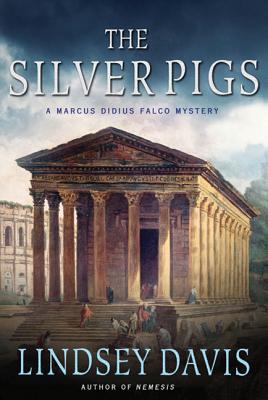 The Silver Pigs is the classic novel which introduced readers around the world to Marcus Didius Falco, a private informer with a knack for trouble, a tendency for bad luck, and a frequently incovenient drive for justice.
When Marcus Didius Falco encounters the young and very pretty Sosia Camillina in the Forum, he senses immediately that there is something amiss. When she confesses that she is fleeing for her life, Falco offers to help her and, in doing so, he gets himself mixed up in a deadly plot involving stolen ingots, dangerous and dark political machinations, and, most hazardous of all, one Helena Justina, a brash, indominable senator's daughter connected to the very traitors that Falco has sworn to expose.

“Davis is both a deft storyteller and a scholar...a top drawer series.” —Newsday

“The Rome of Davis' imagination is licentious and entertaining.” —San Jose Mercury News on THE MARCUS DIDIUS FALCO SERIES

“Excellent… a cross between I, CLAUDIUS and MYSTERY!” —Rocky Mountain News on THE MARCUS DIDIUS FALCO SERIES

“A pure delight… brilliantly [immerses] us in the marvels of ancient Roman life.” —Good Book Guide on The Accusers

“An irresistible package of history, mystery, and fast-moving action, all punctuated by a sense of humor that few writers can match.” —Cleveland Plain Dealer on Venus in Copper

“Davis's vision of everyday life in the Roman Empire is superb. I haven't read historical fiction this good since I, Claudius by Robert Graves and The Persian Boy by Mary Renault.” —Detroit Free Press on Shadows in Bronze

“Lindsey Davis doesn't just bring Rome to life--she brings life to Rome better than anyone else ever has.” —Detroit Free Press on The Iron Hand of Mars