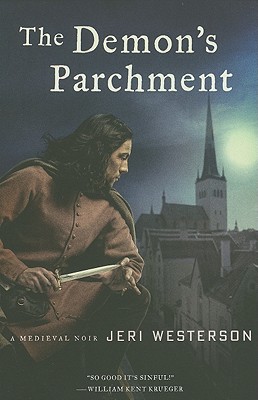 In fourteenth century London, Crispin Guest is a disgraced knight convicted of treason and stripped of his land, title and his honor. He has become known as the “Tracker”—a man who can find anything, can solve any puzzle and, with the help of his apprentice, Jack Tucker, an orphaned street urchin with a thief ’s touch—will do so for a price. But this time, even Crispin is wary of taking on his most recent client. Jacob of Provencal is a Jewish physician at the King’s court, even though all Jews were expelled from England nearly a century before. Jacob wants Crispin to find stolen parchments that might be behind the recent, ongoing, gruesome murders of young boys, parchments that someone might have used to bring forth a demon which now stalks the streets and alleys of London.


Praise For The Demon's Parchment: A Medieval Noir…

"This superb series isn’t kidding when it describes itself as medieval noir.... The writing is wonderful and the history vividly presented. Not to be missed by fans of real historical mysteries."
--RT Book Reviews (Top Pick!)

"Westerson skillfully lulls her sleuth and the reader into a sense of 'I know what is going on,' then zings them with the truth. Absolutely first-class; highly recommended."
--Library Journal

"A solid plot and cast of characters, a feel for the story’s place and time (fourteenth-century England), and an appealing noirish air. A welcome addition to the medieval-mystery landscape."
--Booklist

"Information on 14th-century anti-Semitism and homosexuality are highlights of Crispin’s third adventure, based on a real 15th-century crime spree."
--Kirkus Reviews

JERI WESTERSON is the author of two previous novels featuring Crispin Guest; "Veil of Lies "and "Serpent in the Thorns." She is also a journalist and noted blogger on things mysterious and medieval. She lives in Menifee, California.
Loading...
or
Not Currently Available for Direct Purchase