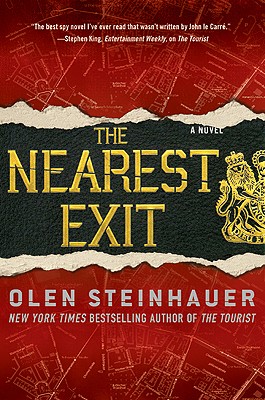 Now faced with the end of his quiet, settled life, reluctant spy Milo Weaver has no choice but to turn back to his old job as a “tourist.” Before he can get back to the CIA’s dirty work, he has to prove his loyalty to his new bosses, who know little of Milo’s background and less about who is really pulling the strings in the government above the Department of Tourism—or in the outside world, which is beginning to believe the legend of its existence. Milo is suddenly in a dangerous position, between right and wrong, between powerful self-interested men, between patriots and traitors—especially as a man who has nothing left to lose.

Praise For The Nearest Exit…

Praise for The Tourist


“Here’s the best spy novel I’ve ever read that wasn’t written by John le Carré… It’s a complex story of betrayal anchored by a protagonist who’s as winning as he is wily.”
--Stephen King, Entertainment Weekly
“Smart… He excels when the focus is on Weaver, an intriguing, damaged man yearning to break free of his dark profession.”
--People
“Remember John le Carré… when he wrote about beaten-down, morally directionless spies? In other words, when he was good? That's how Olen Steinhauer writes in this tale of a world-weary spook who can't escape the old game.”
--Time
“Elaborately engineered… As for Mr. Steinhauer, the two-time Edgar Award nominee who can be legitimately mentioned alongside of John le Carré, he displays a high degree of what Mr. le Carré’s characters like to call tradecraft. If he’s as smart as The Tourist makes him sound, he’ll bring back Milo Weaver for a curtain call.”
--The New York Times
“Tour de force… First-rate popular fiction… The Tourist is serious entertainment.”
--Washington Post
“The Tourist should be savored now. As rich and intriguing as the best of le Carré, Deighton or Graham Greene, Steinhauer's complex, moving spy novel is perfect for our uncertain, emotionally fraught times.”
--Los Angeles Times
“As in the best of le Carré's work, the clandestine world of The Tourist is as much about bureaucrats as it is about black bag ops. Steinhauer has a solid grasp of the espionage world (either that or a fertile imagination) that enlivens his enjoyable story.”
--Chicago Sun-Times

Olen Steinhauer is the author of the bestselling Milo Weaver series, including "The Tourist," and a series of widely acclaimed Eastern European crime novels, which include "The Bridge of Sighs, The Confession, 36 Yalta Boulevard, Liberation Movements," and "Victory Square." He is a two-time Edgar Award finalist and has been shortlisted for the Anthony, the Macavity, the Ellis Peters Historical Dagger, and the Barry awards. Raised in Virginia, Steinhauer lives with his family in Budapest, Hungary.
Loading...
or
Not Currently Available for Direct Purchase