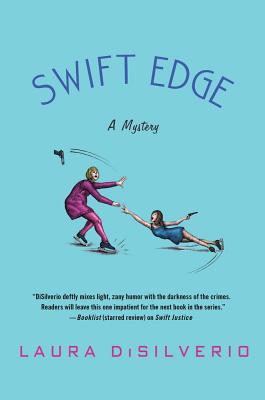 When world-class figure skater Dmitri Fane goes missing, his partner knows just whom to hire. It’s up to Swift Investigations to find the missing Fane, and fast---the Olympics are just weeks away. It should be no trouble for the investigative team of Charlie Swift and Gigi Goldman: Their chief obstacle is Gigi’s teenage daughter, Kendall, and her mad crush on Fane. That is, until the skating team’s coach is brutally attacked and a colleague of Dmitri is killed, and things start to get complicated.

Gigi’s corralling a lovesick Kendall and dying to test out the hilarious techniques from her surveillance class. Charlie’s dodging bullets and fending off Detective Connor Montgomery’s advances. Their client is suddenly MIA. Can Charlie and Gigi solve two missing-persons cases and a murder at once, or will the culprit get off skate-free?

Fast-paced adventure, high-stakes intrigue, and the madcap capers of these unlikely partners-in-crime solving make Swift Edge a delightful and welcome addition to the series.


Praise For Swift Edge: A Mystery…

“Charlie and Gigi are both wonderful characters, flawed but appealing. This well-crafted, zany mystery will appeal, especially, to fans of Janet Evanovich, Laura Levine, and Lisa Lutz, whose work displays the same kind of humor.”--Booklist

"DiSilverio has a bit of Sue Grafton’s tone about her, with a dash of Janet Evanovich thrown in, thanks to Charlie’s always unpredictable partner, Gigi. Expect to laugh...with this enjoyable read."--Library Journal "In DiSilverio’s amusing second mystery...Allgood and CSPD Det. Connor Montgomery provide romantic frissons for Charlie as she juggles the two complex and dangerous cases with aplomb. Readers will look forward to seeing more of Charlie and her two clueless assistants."--Publishers Weekly "Swift Edge is a light-hearted mystery that is fun and funny, peppered with great characters, and totally un-put-downable."--Fresh Fiction

"DiSilverio's sequel to her highly praised debut novel, 'Swift Justice,' is ideal for those who enjoy humorous mysteries. Fans of Janet Evanovich will be easily hooked and impressed; the adventures of the Swift Investigation team are highly entertaining but not quite as goofy."--Lansing State Journal

Laura DiSilverio spent twenty years as an Air Force intelligence officer, serving as a squadron commander, with the National Reconnaissance Office, and at a fighter wing, before retiring to parent and write full time. She resides in Colorado with her hubby, tweenage daughters, and dog.
Loading...
or
Not Currently Available for Direct Purchase