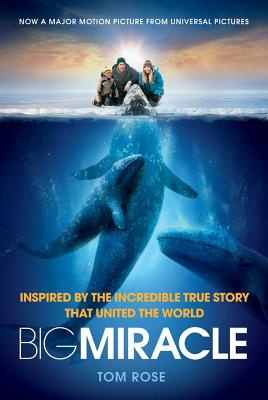 Inspired by the Incredible True Story that United the World

Now a major motion picture starring Drew Barrymore, Ted Danson, Kristen Bell, Tim Blake Nelson, John Krasinski, and Vinessa Shaw—an account of the dramatic rescue of three gray whales trapped under the ice in Alaska in 1988.
Set in Cold War–era 1988, Big Miracle tells the real story behind the remarkable, bizarre, and oftentimes uproarious event that mesmerized the world for weeks. On October 7, an Inuit hunter near Barrow, Alaska, found three California Gray whales imprisoned in the Arctic ice. In the past, as was nature's way, trapped whales always died. Not this time. Tom Rose, who was covering the event for a Japanese TV station, compellingly describes how oil company executives, environmental activists, Inupiat people, small business people, and the U.S. military boldly worked together to rescue the whales. He also tells the stories of some of the more than 150 international journalists who brought the story to the world's attention. The rescue was followed by millions of people around the world as Ronald Reagan and Mikhail Gorbachev joined the forces of their two nations to help free the whales.


Praise For Big Miracle: Inspired by the Incredible True Story that United the World…

“...the surprising tale of how three creatures sparked a global effort that united warring factions in sheer awe at the bulky yet graceful denizens of this stark and little-understood world.” —Publishers Weekly

Tom Rose, the former publisher and CEO of The Jerusalem Post, cohosts the Bauer & Rose show on Sirius/XM satellite radio. He writes and comments regularly on  American and Middle East politics. He lives in Indianapolis, Indiana.