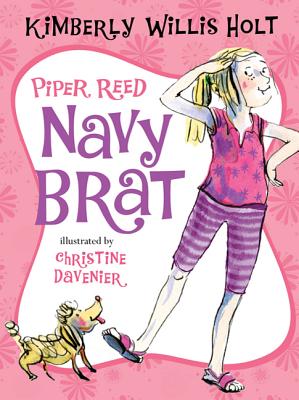 Based on her own childhood experience, Kimberly Willis Holt's Piper Reed, Navy Brat portrays the life of a Navy family with warmth and humor.

It's not easy being the middle child, especially when your dad is a Navy Chief. Meet Piper Reed, a spunky nine-year-old who has moved more times than she can count on one hand. From Texas to Guam, wherever Piper goes, adventure follows, inspired by her active imagination, free-wheeling spirit, and a bit of sister magic. Unlike her older sister, Piper loves being part of a Navy family, and unlike her little sister, Piper is no prodigy genius. Piper is Piper—fearless and full of life.

“This entertaining read will appeal to fans of Judy Moody and Ramona Quimby.” —School Library Journal

“...award-winning author Holt tells a lively family story that draws on her experiences of growing up a Navy brat.” —Booklist

“Piper's lively imagination, wholesomeness and moments of ‘sister magic' are likable and believable. This easy chapter book, based on Holt's own experiences, is spot on with the details of roving family life. Davenier's fluid black-and-white drawings fit the mood and characters . . . Launching a new series, Piper's foray sets sail with verve, fun and spunk.” —Kirkus Reviews